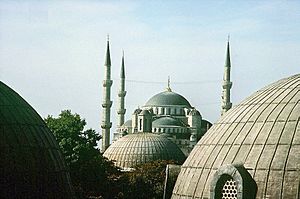 The Sultan Ahmed Mosque, also known and referred to as the Blue Mosque, from the window of the upper gallery of the Hagia Sophia, in Istanbul

The Sultan Ahmed Mosque, commonly called the Blue Mosque, is a mosque in Istanbul, Turkey. It was built between 1609 and 1616, when Ahmed I ruled the Ottoman Empire. Like with many other mosques, the founder of the mosque is buried in it. His architect, Sedefkar Mehmed Agha, decorated it like a jeweler would. There is also a madrasah and a hospice associated with the mosque. Today it is one of the greatest tourist attractions in Istanbul.

According to legend day Sultan I. Ahmet wanted gold minarets on his mosque. The word for gold in Turkish is altın. Apparently this was misunderstood as alti, or six. So the mosque has six minarets.

All content from Kiddle encyclopedia articles (including the article images and facts) can be freely used under Attribution-ShareAlike license, unless stated otherwise. Cite this article:
Sultan Ahmed Mosque Facts for Kids. Kiddle Encyclopedia.