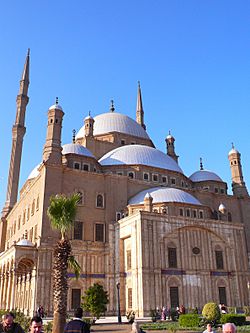 The Ottomans achieved the highest level architecture in their lands. They mastered the technique of building vast inner spaces confined by seemingly weightless yet massive domes. Their work achieved harmony between inner and outer spaces, as well as light and shadow. Islamic religious building, which until then was simple but with extensive decoration, was transformed by the Ottomans. They used vaults, domes, semi-domes and columns. The mosque was changed from being a cramped and dark chamber with arabesque-covered walls into a beautiful sanctuary.

All content from Kiddle encyclopedia articles (including the article images and facts) can be freely used under Attribution-ShareAlike license, unless stated otherwise. Cite this article:
Ottoman architecture Facts for Kids. Kiddle Encyclopedia.