Aydın is a city in northern Turkey. The city is in the Aegean Region. In 2013, 265,234 people lived there.The city is located at the heart of the lower valley of Büyük Menderes River (ancient Meander River) at a commanding position for the region extending from the uplands of the valley down to the seacoast. Its population was 207,554 in 2014. 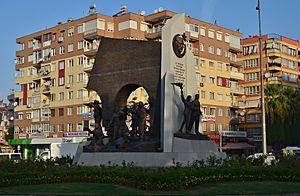 Monument to Turkish War of Independence in Aydın.

All content from Kiddle encyclopedia articles (including the article images and facts) can be freely used under Attribution-ShareAlike license, unless stated otherwise. Cite this article:
Aydın Facts for Kids. Kiddle Encyclopedia.