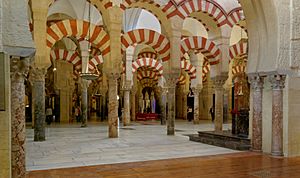 Muslim architecture of the Mezquita. 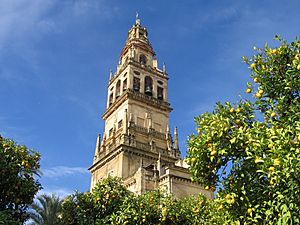 This used to be the minaret. It has been converted to a belltower.

The Mezquita (Spanish for "mosque") of Cordoba is a Roman Catholic cathedral. It used to be a mosque situated in the Andalusian city of Córdoba, Spain. At first the site had been used for a temple, then a Christian cathedral. Under the rule of Islam, it was built as the second-largest mosque in the world. It is perhaps the most accomplished monument of the Umayyad dynasty of Cordoba. It changed into mosque in Middle Ages. After the Spanish Reconquista, it was changed back into a church, and some of the Islamic columns and arcs were replaced by a basilica in early Baroque style. Today it houses the main church of the diocese of Cordoba in Spain.

All content from Kiddle encyclopedia articles (including the article images and facts) can be freely used under Attribution-ShareAlike license, unless stated otherwise. Cite this article:
Mezquita de Córdoba Facts for Kids. Kiddle Encyclopedia.