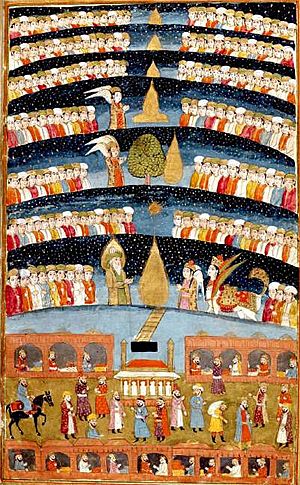 Jannah "garden", is the final abode of the righteous and the Islamic believers, but also the Garden of Eden, where Adam and Hawwa dwelt. Firdaws is the literal term meaning paradise, but the Quran generally uses the term Jannah symbolically referring to paradise. However "Firdaus" also designates the highest layer of heaven.

Jannah is often compared to Christian concepts of Heaven.

In the Quran, "the Garden" is described with material delights, such as delicious foods, and constantly flowing water—the latter especially appealing to the desert dwelling Arabs, who spend most of their life in arid lands. The Islamic texts describes life for its immortal inhabitants as: one that is happy—without hurt, sorrow, fear or shame—where every wish is fulfilled.

Traditions relate that inhabitants will be of the same age (33 years), and of the same standing. Their life is one of bliss including wearing sumptuous robes, bracelets and perfumes as they partake in exquisite banquets. According to Muslim belief, everything one longs for in this world will be there in Paradise. Inhabitants will rejoice in the company of their parents, spouses, and children.

All content from Kiddle encyclopedia articles (including the article images and facts) can be freely used under Attribution-ShareAlike license, unless stated otherwise. Cite this article:
Jannah Facts for Kids. Kiddle Encyclopedia.