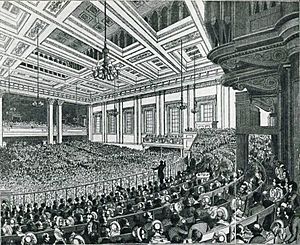 The Anti-Corn Law league organized many protests, such as this one, in 1846

The Corn Laws were trade laws designed to protect cereal producers in the United Kingdom of Great Britain and Ireland against competition from less expensive foreign imports between 1815 and 1846.

More simply, to insure that British landowners reaped all financial profits from farming, the corn laws made it too expensive for anyone to import grain from other countries, even when the people of Great Britain and Ireland needed the food (as in times of famine). The laws caused many protests, and they were phased out under the government of Robert Peel, in 1846. Despite this, over one million people starved in Ireland, between 1846 and 1849. This famine is known as Irish Potato Famine today.

The Corn Laws enhanced the profits and political power associated with land ownership; their abolition was a significant increase of free trade.

During 1813, a House of Commons Committee recommended excluding foreign-grown corn until the price of corn grown domestically increased. The political economist Thomas Malthus believed that it would be dangerous for Britain to rely on imported corn as lower prices would reduce labourers' wages, and manufacturers would lose out due to the decrease of purchasing power of landlords and farmers.

However, David Ricardo believed in free trade so Britain could use its capital and population to its comparative advantage. With the advent of peace during 1814, corn prices decreased, and the Tory government of Lord Liverpool passed the 1815 Corn Law. This resulted in serious rioting in London

All content from Kiddle encyclopedia articles (including the article images and facts) can be freely used under Attribution-ShareAlike license, unless stated otherwise. Cite this article:
Corn Laws Facts for Kids. Kiddle Encyclopedia.