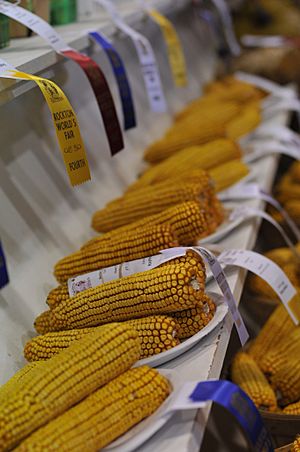 In Britain, thanks have been given for successful harvests since pagan times. The celebrations on this day usually include singing hymns, praying and decorating churches with baskets of fruit and food in the festival known as Harvest Festival or Harvest Home or Harvest Thanksgiving or Thanksgiving.

In British churches, chapels, and schools people bring in food from the garden, the allotment or farm. The food is often distributed among the poor and senior citizens of the local community, or used to raise funds for the church, or charity.

In the USA and Canada, the festival is set on a certain day and has become a National Holiday known as Thanksgiving. In North America it has become a national secular holiday with religious origins, but in Britain it remains a Church festival giving thanks to God for the harvest.

When is Harvest Festival?

Harvest is from an Anglo-Saxon word "haerfest" which meant 'Autumn.' It then came to refer to the season for reaping and gathering grain and other grown products. The full moon nearest the autumnal equinox is called the Harvest Moon. So in ancient traditions Harvest Festivals were traditionally held on or near the Sunday of the Harvest Moon. This moon is the full moon which falls in the month of September. 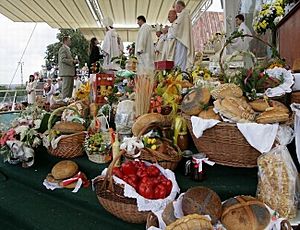 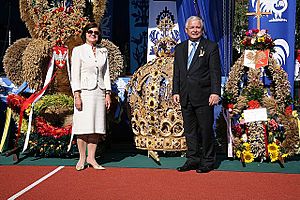 An early Harvest Festival used to be celebrated at the beginning of the Harvest season on 1 August and was called Lammas, meaning 'loaf Mass'. Farmers made loaves of bread from the fresh wheat crop. These were given to the local church as the Communion bread during a special service thanking God for the harvest.

Early settlers took the idea of harvest thanksgiving to North America. The most famous one is the harvest Thanksgiving held by the Pilgrims in 1621.

Nowadays the festival is held at the end of harvest which varies in different parts of Britain. Sometimes neighbouring churches will set the Harvest Festival on different Sundays so that people can attend each other's thanksgivings.

Farmers celebrated the end of the harvest with a big meal called a harvest supper. Some churches and villages still have a Harvest Supper.

The modern British tradition of celebrating Harvest Festival in churches began in 1843, when the Reverend Robert Hawker invited parishioners to a special thanksgiving service at his church at Morwenstow in Cornwall. Victorian hymns such as "We plough the fields and scatter", "Come ye thankful people, come" and "All things bright and beautiful" helped popularise his idea of harvest festival and spread the annual custom of decorating churches with home-grown produce for the Harvest Festival service.

In the early days, there were ceremonies and rituals at the beginning as well as at the end of the harvest.

Nowadays the festival is held at the end of harvest, which varies in different parts of Britain. Sometimes neighbouring churches will set the Harvest Festival on different Sundays so that people can attend each other's thanksgivings.

All content from Kiddle encyclopedia articles (including the article images and facts) can be freely used under Attribution-ShareAlike license, unless stated otherwise. Cite this article:
Harvest festival Facts for Kids. Kiddle Encyclopedia.