Wyomissing is a borough in Berks County, Pennsylvania, United States, established on July 2, 1906. As of the 2010 census, the population was 10,461, compared to 8,587 at the 2000 census. The population growth of the borough was largely due to its merger in January 2002 with neighboring Wyomissing Hills. Wyomissing is the most populous borough in Berks County. The borough is recognized as a Tree City USA and selected as a "Contender" for the best places to live in Pennsylvania by Money magazine. 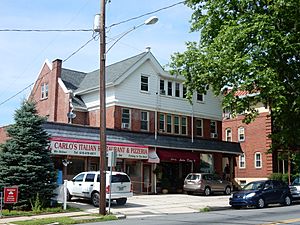 The original inhabitants of Wyomissing were Lenape (Delaware) Native Americans, who lived along the banks of Wyomissing Creek. The name Wyomissing is from the Delaware language, meaning "the land of flats". Much of Berks County was transferred from the Native Americans to William Penn in 1685. Title to the land that much of Wyomissing is built upon was in two parcels, an eastern tract and a western tract, which were divided by a northwesterly line in the vicinity of Lake Avenue. One of the earliest industries in the area was the Evans Grist Mill. This building still stands at the corner of Old Mill Road and Old Wyomissing Road.

On July 2, 1906, the court issued the final decree of the incorporation of the Borough of Wyomissing.

Between 1906 and the 1940s, several additional tracts of land were annexed to the borough from Spring and Cumru townships. However, 1949-1950 saw the largest annexation, With the addition of the area north of the railroad tracts known as Berkshire Heights. This drastically changed the borough map.

From that point forward, the borough changed from farmland to a large residential and commercial community. The last farmland worked in the borough was part of the Hartman Farm at the intersection of Woodland and Papermill roads. This land was sold into commercial development in the early 1990s. This includes the area now called "Woodmill Commons", where Toys R Us, Old Navy and other businesses now are located.

All content from Kiddle encyclopedia articles (including the article images and facts) can be freely used under Attribution-ShareAlike license, unless stated otherwise. Cite this article:
Wyomissing, Pennsylvania Facts for Kids. Kiddle Encyclopedia.