Kids Encyclopedia Facts
Not to be confused with Mt. Lebanon, Pennsylvania, a township in Allegheny County across the state.

Lebanon was founded by George Steitz in 1740 and was originally named Steitztown.

Native tribes in the area of what is now Lebanon included the Shawnee, Susquehannock, Gawanese, Lenape (or Delaware), and Nanticoke peoples. 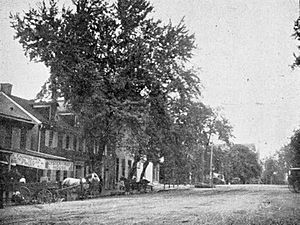 Lebanon was settled by European colonists in 1720, many with the family names of "Steitz" and "Light", along a creek that was then named "Steitz Creek". The Light patriarchs built a fort to protect against Indians and named it "Light's Fort". The town was laid out in 1753, incorporated as a borough on February 20, 1821, and became a city on November 25, 1885. It adopted the commission form of government, consisting of four councilmen and a mayor.

Lebanon bologna was first made here. Lebanon was formerly home to a major steel mill operated by Bethlehem Steel. 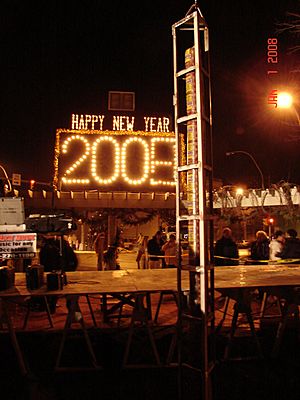 Lebanon, Pennsylvania, is named after the ancient Middle Eastern nation of Lebanon, ("Leb-a-nin") and many shorten it to two syllables—"Leb-nin" or even "Lep-nin." The latter is particularly identified with Pennsylvania Dutch heritage.

At one point in history the Lebanon County courthouse and jail became the home of the popular Lebanon Farmers Market. However, the market returned to the original 30,000 square foot Market House on South 8th street in 2003.

Lebanon is one of several Pennsylvania towns to drop or raise a unique item at midnight on New Year's Eve. Godshall's Quality Meats, owners of Weaver's Famous Lebanon Bologna, donates a 150-pound (68 kg) Lebanon bologna for the annual festivity. It is encased in a metal frame and suspended from a fire department ladder truck, and donated to a local rescue mission after the celebration.

In December 2008, the TV show Dirty Jobs, hosted by Mike Rowe, visited the Seltzer's Smokehouse Meats to film production of Lebanon bologna. In 2008 the show featured the Wertz Candy Shop.

In 2010, an independent film drama Lebanon, PA was made. While the movie was set in Lebanon, all filming was done in other parts of Pennsylvania. 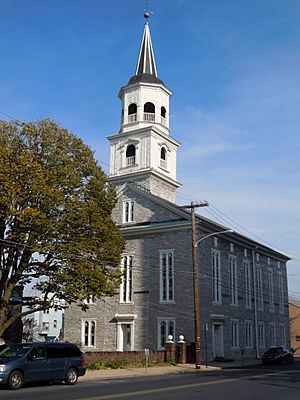 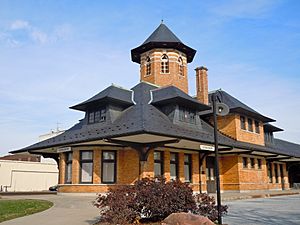 Local points of interest listed on the National Register of Historic Places include:

All content from Kiddle encyclopedia articles (including the article images and facts) can be freely used under Attribution-ShareAlike license, unless stated otherwise. Cite this article:
Lebanon, Pennsylvania Facts for Kids. Kiddle Encyclopedia.