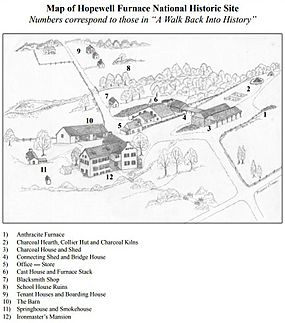 Hopewell Furnace was founded c. 1771 by ironmaster Mark Bird, son of William Bird, who had been one of Pennsylvania's most prominent ironmasters. The site's most prosperous time was during the 1820-1840 period with a brief return to significant production during the American Civil War. In the mid 19th century changes in iron making, including a shift from charcoal-fueled furnaces to anthracite-fueled steel mills rendered smaller furnaces like Hopewell obsolete. The site discontinued operations in 1883.

In 1938 the property was designated Hopewell Village National Historic Site under the authority of the Historic Sites Act, thereby becoming one of the earliest cultural units of the National Park System.

Today, Hopewell Furnace consists of 14 restored structures, 52 features on the List of Classified Structures, and a total of 848 mostly wooded acres. Hopewell Furnace National Historic Site is located in the Hopewell Big Woods and bordered by French Creek State Park on three sides and State Game Lands 43 on the south side, which preserves the lands the furnace utilized for its natural resources.

All content from Kiddle encyclopedia articles (including the article images and facts) can be freely used under Attribution-ShareAlike license, unless stated otherwise. Cite this article:
Hopewell Furnace National Historic Site Facts for Kids. Kiddle Encyclopedia.