Birdsboro is a borough in Berks County, Pennsylvania, United States. Located along the Schuylkill River, it is 8 miles (13 km) southeast of Reading. As of the 2010 census, it had a population of 5,163. In the past, Birdsboro was noted for its large foundries and machine shops, none of which remain in operation today. 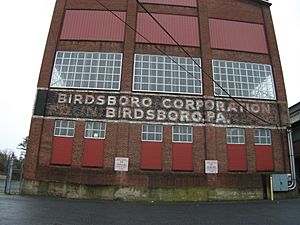 Birdsboro was named for ironmaker William Bird, who established a forge on Hay Creek about 1740. His son Marcus founded Hopewell Furnace in 1771, which was the largest domestic producer of iron by the time of the American Revolution. The Schuylkill Canal, running parallel to the river, was completed in 1827. The Philadelphia and Reading Railroad, constructed to haul anthracite coal, was completed in 1843. Edward and George Brooke, descendants of the Birds, established the Birdsboro Iron Foundry Company (1867), which became Birdsboro Steel Company (1905). The principal employer for 120 years, the steel plant closed in 1988, following a lengthy strike.

Armorcast Corporation built a plant in the borough in 1944, which manufactured tanks for World War II and the Korean War. The plant closed in 1988.

Suburban housing developments such as Mansion Heights, built on the hills overlooking the valley in the 1980s and 1990s, increased the borough's population markedly. Still, the local Episcopal church closed in 2002, and the Roman Catholic parish built a new church and school outside the borough, in Douglassville, in 2005.

In 1987, torrential rains over a period of several days caused Hay Creek to flood parts of Pennsylvania Route 82, which ran through the borough at the time, and damaged the five bridges between Rock Hollow Road and Douglas Street. The bridge upstream from Douglas Street was repaired. However, after many years of discussion between local and state officials, the decision was finally made in 2004 that the remaining upstream bridges should not be rebuilt. Instead, the former road connecting Birdsboro to Scarlet's Mill would be used formally as a nature trail, as it had been informally used since the time of the flood. In December 2008, the PA 82 designation was removed from this stretch of road. This area is now part of Hopewell Big Woods, which allows public access for hiking, fishing, hunting and other outdoor activities.

St. Michael's Protestant Episcopal Church, Parish House and Rectory was listed on the National Register of Historic Places in 1982.

Birdsboro is located on the northern edge of the Hopewell Big Woods, the largest area of contiguous forest in southeastern Pennsylvania.

The climate in this area is characterized by hot, humid summers and generally mild to cool winters. According to the Köppen Climate Classification system, Birdsboro has a humid subtropical climate, abbreviated "Cfa" on climate maps.

All content from Kiddle encyclopedia articles (including the article images and facts) can be freely used under Attribution-ShareAlike license, unless stated otherwise. Cite this article:
Birdsboro, Pennsylvania Facts for Kids. Kiddle Encyclopedia.