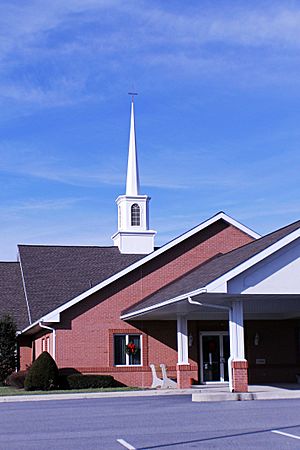 The Lutheran Church of Leinbachs

Leinbachs is an unincorporated community in southern Bern Township, Pennsylvania, just northwest of Reading and the Reading Regional Airport. it is also located near Blue Marsh Lake. Leinbachs' proximity to these locations has given it significant growth in recent years. Commercial Growth includes the construction of a suburban development, warehouses, and other enterprises.

Leinbachs was, until the 1950s, a sparsely populated farming community, located just outside Reading. Since the development of the highway system and the construction of Route 183, Leinbachs has experienced steady growth. It currently is home to the Bern Township Police Department, as well as a community center. Though the population's numbers are included in the Bernville census records, a suburban development was built in 2008. The area is also home to numerous commercial enterprises new to the area, including a Vist Financial bank and a Harley Davidson training and sales facility.

The Lutheran Church of Leinbachs

All content from Kiddle encyclopedia articles (including the article images and facts) can be freely used under Attribution-ShareAlike license, unless stated otherwise. Cite this article:
Leinbachs, Pennsylvania Facts for Kids. Kiddle Encyclopedia.