Bally is a borough in Berks County, Pennsylvania, United States. The population was 1,090 at the 2010 census.

The Borough of Bally was originally called Goshenhoppen, possibly deriving from an Indian word meaning "meeting place". Others claim the name derives from German settlers from Goshen, PA calling the area their haven or "Hafen" in German, eventually becoming "Goshenhoppen". Mennonites and Catholics settled it in the early 18th century. Clergyman Ulrich Beidler erected the first house of worship, the Mennonite Church in 1731. Father Theodore Schneider, a Jesuit priest, came to the area in 1741 and established what would be just the third Catholic mission church in the 13 original colonies. On land received from the Mennonite community, Father Schneider built St. Paul's Chapel in 1743. St. Paul's is now known as the Most Blessed Sacrament Church, and it is the oldest existing Catholic place of worship in Pennsylvania and the fourth oldest Catholic structure in the thirteen original colonies.

Later in 1743 Father Schneider started a Catholic school at the mission church. The school, originally called St. Aloysius Academy, also marked the beginning of Catholic education in the 13 original colonies. After several name changes, it is currently known as St. Francis Academy, and is the oldest currently operating co-educational Catholic school in the nation.

To reflect the many churches in the town (as there were also several other churches in the area of different denominations), Goshenhoppen was renamed Churchville. When the post office was established in 1883, the townsfolk changed the name to "Bally" in memory of Fr. Augustine Bally, S.J., a Catholic pastor beloved by all, who had died the previous year. Bally was incorporated as a borough in 1912, with Henry Eddinger, son of Frederick K. and Sophia (Miller) Eddinger, appointed as the first Burgess.

Bally has traditionally been a home of many Pennsylvania Dutch settlers and their descendants.

In 1912, Bally resident Annie Clemmer Funk, a Mennonite missionary to India, died during the sinking of the RMS Titanic. She was en route to Bally to visit her ailing mother, and reportedly gave up her seat in a lifeboat to another passenger.

There were 413 households, out of which 28.8% had children under the age of 18 living with them, 59.3% were married couples living together, 10.9% had a female householder with no husband present, and 26.2% were non-families. 22.8% of all households were made up of individuals, and 12.6% had someone living alone who was 65 years of age or older. The average household size was 2.57 and the average family size was 2.98.

There are numerous business and industry in town, some of which are known internationally. Among the largest industries are Bally Ribbon Mills, Bally Block Co. and PB Heat LLC. Two other major manufacturers, Great American Knitting Mills (now Gold Toe Socks) and Bally Case and Cooler (now Bally Refrigerated Boxes) were founded in Bally, and were located there for decades.

The area is also well known for its agriculture. Bally lies in the heart of an area named "Butter Valley", extending from Hereford, through Bally, to Boyertown. The name is due to the large number of dairy farms in the valley. 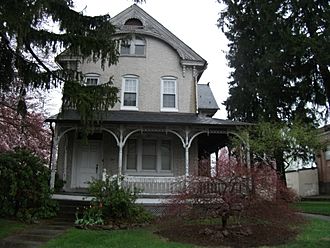 All content from Kiddle encyclopedia articles (including the article images and facts) can be freely used under Attribution-ShareAlike license, unless stated otherwise. Cite this article:
Bally, Pennsylvania Facts for Kids. Kiddle Encyclopedia.