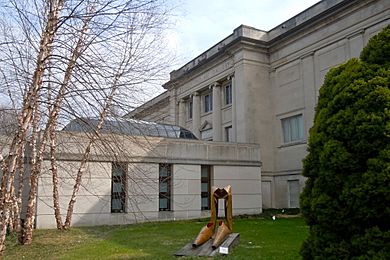 The Reading Public Museum, in West Reading, Pennsylvania, has displays featuring science and civilizations, a planetarium and a 25-acre (100,000 m2) arboretum. It also offers educational programs for families, adults and children. Galleries feature an eclectic variety from art, armor, and artifacts of world civilizations, to natural history and the cultures of Native Americans and Pennsylvania Germans.

While the art of many nations and people is represented in the permanent collection, special emphasis has been placed on painting. The fine art collection includes more than seven hundred oil paintings by American and foreign artists such as Benjamin West, Milton Avery, John Singer Sargent, N.C. Wyeth, George Bellows, Raphaelle Peale, Frederic Church, Joshua Reynolds, and Edgar Degas. In addition, the Reading Public Museum possesses over one hundred sculptures, thousands of graphics, and more than two hundred water colors. Modern and Contemporary art in the collection includes works by Dale Chihuly, Chuck Close, and Keith Haring.

Art objects of importance have come to the Reading Museum from all over the world. The series of Greek vases contain some excellent examples of the various periods and techniques which illustrate the development of this art form. The museum's collection includes a real mummy from the Ptolemaic period in ancient Egypt.

The natural history collection includes hundreds of thousands of insects, thousands of birds and mammals, and more than 25,000 mineral specimens. Over 30,000 objects are included in the anthropological and historical collections, including sculpture from Southeast Asia, ivory and jade from China, Roman glass, pre-Columbian gold and a large and comprehensive collection of sculpture and textile work of American Indians, much of which is unique to the Museum. Many of the works in the collection have been donated by citizens. Over 11,000 first class specimens, the best of several old collections purchased by Levi Walter Mengel in the first half of this century, make up the collection of Berks County Indian relics. 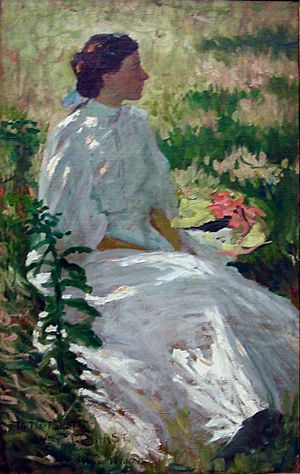 A Study in White (undated), by Charles Webster Hawthorne.

Mengel's personal collections, donated during his lifetime, formed the nucleus of the present Museum. The first important teaching exhibits of museum calibre were obtained at the St. Louis World's Fair in 1904. Nearly 2,000 items were obtained from China, Japan, India, Ceylon, the Philippines and the Central and South American Republics.

With this as a beginning, the third floor of the Reading School District administration building at Eighth and Washington Streets was converted into a museum in 1907. In 1913, the first suggestion was made that an art gallery be incorporated into the plan. Several paintings were presented and the name of the infant museum became the READING PUBLIC MUSEUM AND ART GALLERY.

It was in 1924 that the Reading School District asked the citizens of Reading to approve a loan to provide certain needed school buildings. Included in this were provisions for a modern museum building. After a campaign in which the school children took an active part, the loan was passed and the plans for the Museum were drawn up. The present site was selected and donated to the Reading School District by Ferdinand Thun, Henry Janssen, and Gustav Oberlaender, three Wyomissing textile magnates, and friends of Mengel, breaking ground in 1925.

By 1928 the current Museum building opened to the public and the collections continued to grow. As with most museums, a comparatively small part of the collection is on exhibit at any one time. Much of the material is held in reserve to permit changes in the displays from time to time, while others are educational collections which may never be exhibited, but are preserved for scholarly study.

The Levi W. Mengel Memorial Trust was established to provide funds to make possible the purchase of some of the many fine and desirable articles which are available from time to time. Increasing the amount of money in the endowment fund is a constant challenge, and gifts or bequests are earnestly solicited.

The 25-acre (100,000 m2) Arboretum at the Reading Public Museum has been a gem of Berks County since the current Museum building opened in 1928. For over 80 years the Arboretum has been the home of many events: from light-hearted lilac festivals to educational tree walks; private wedding photo shoots to Public Pops concerts; landscape drawing classes to impromptu picnics; and the traditional Easter at the Museum.

Concerned for the future of the grounds, the Museum and its supporters commissioned Wallace Roberts & Todd, LLC, an award-winning independent firm of landscape architects, urban designers, and planners, to help create a Landscape Master Plan. The result is a restoration guide that will help recapture the Arboretum’s former spirit, and to provide a memorable, educational and inspiring visit for Museum visitors.

All content from Kiddle encyclopedia articles (including the article images and facts) can be freely used under Attribution-ShareAlike license, unless stated otherwise. Cite this article:
Reading Public Museum Facts for Kids. Kiddle Encyclopedia.