Holland is an unincorporated community in Northampton Township, Bucks County, Pennsylvania, United States. It is located next to Newtown, Warrington, Richboro, and Churchville. One of its communities is Village Shires, which has approximately 4,000 residents.

Despite its proximity to Philadelphia, Holland was rural for much of its history. A building boom in the 1970s resulted in a significant increase in housing capacity, mainly in the form of large tract housing developments (e.g. Hillcrestshire, located off of Buck Road). Since then, the town has seen additional growth, becoming a prototypical commuter bedroom community for suburban families. The area's proximity to both Philadelphia and the Trenton/Princeton, New Jersey area make Holland a desirable location, despite its lack of public transit.

Notable current and former residents include the following:

Holland's growth as a commuter haven took place in the mid-1980s, just after the town lost its passenger trains. Regularly scheduled train service lasted until January 14, 1983 via SEPTA's Fox Chase Rapid Transit Line. The station, and all of those north of Fox Chase, were closed due to failing diesel train equipment that the then-cash-strapped SEPTA could not afford to rehabilitate. As a result, ridership was low and the service cancelled on a "temporary" basis. As such, Holland Station still appears in SEPTA's publicly posted tariffs. 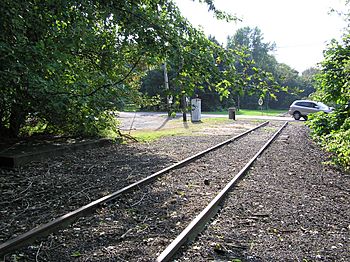 The Holland shelter was demolished in the summer of 2000, shortly after bus service was terminated.

In the ensuing years since 1983, there has been heavy interest by both residents and politicians in resuming passenger service to Holland.

In September 2009, the Southampton-based Pennsylvania Transit Expansion Coalition (PA-TEC) began discussions with township officials along the railway, as well as SEPTA officials, about the realistic possibility of resuming even minimal passenger service to relieve traffic congestion in the region. Plans call for completing the electrification to Newtown, as originally planned in the late 1970s.

PA-TEC's efforts have received overwhelming bipartisan support by both Bucks and Montgomery County officials, as well as at the state level, despite SEPTA's overall reservations. However, SEPTA has also confirmed they are willing to reestablish regular commuter service if strong political support exists in both counties.

All content from Kiddle encyclopedia articles (including the article images and facts) can be freely used under Attribution-ShareAlike license, unless stated otherwise. Cite this article:
Holland, Pennsylvania Facts for Kids. Kiddle Encyclopedia.