Riegelsville is a borough in Bucks County, Pennsylvania, United States. The population was 868 at the 2010 census. It is included in the Philadelphia-Wilmington-Camden Metropolitan Statistical Area, despite being so closely connected to the Lehigh Valley.

Benjamin Riegel founded Riegelsville. The original, and now historic, Riegelsville Inn that he built in 1838 still stands. This historic stone inn has offered food and lodging to Bucks County travelers for over 160 years. The community was named for the Riegel family, as early landowners; they established paper mills across the river in New Jersey. 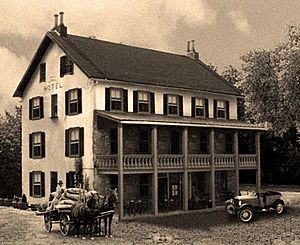 The Riegelsville Inn in black and white

With the completion of the Delaware Canal in 1832, the lands along the Delaware River attracted great industrial development. The movement of coal, a major important product of the area, brought capital & investment to Easton. Boats carried coal, stone, iron, crops and goods from the mills along the 60 miles from Easton to Bristol. Along Canal Street grew one of the largest industrial manufacturing centers of America during the 1830s and 1840s. Easton continued to prosper as a center for industry, manufacturing, commerce, and culture at the Forks of the Delaware and along the great rail lines. Riegelsville prospered when the Delaware Canal opened in 1832 with warehouses and factories lining its banks. The canal closed in 1931 after 99 years of service and was replaced by the railroads. Today, Riegelsville is a peaceful and quiet town. Woods and fields border the Delaware Canal; remnants of crumbling stone foundations along its banks are reminders of a busy past.

Residences near the river built by Riegel Paper Company executives in the late 1880s along "Mansions Row" have been restored.

The Benjamin Riegel House was added to the National Register of Historic Places in 1987.

There were 378 households, out of which 26.5% had children under the age of 18 living with them, 51.6% were married couples living together, 10.1% had a female householder with no husband present, and 33.6% were non-families. 28.3% of all households were made up of individuals, and 12.2% had someone living alone who was 65 years of age or older. The average household size was 2.28 and the average family size was 2.77.

All content from Kiddle encyclopedia articles (including the article images and facts) can be freely used under Attribution-ShareAlike license, unless stated otherwise. Cite this article:
Riegelsville, Pennsylvania Facts for Kids. Kiddle Encyclopedia.