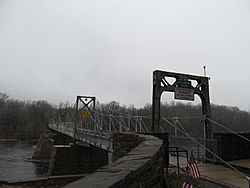 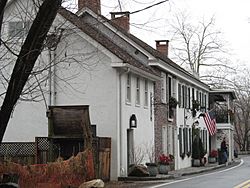 Lumberville, Pennsylvania is a village on the Delaware River in Solebury Township, Bucks County, Pennsylvania, with a ZIP code of 18933. It is seven miles north of New Hope, Pennsylvania, and is located along River Road.

The village was settled by Colonel George Wall, a Revolutionary War officer and Bucks County Sheriff. As such it was originally named Wall's Saw Mills and Walls Landing. Ultimately, William Tinsman purchased the lumber mills in 1869, and the mills are operated by his descendents to this day.

The Black Bass Inn was built in the early 1740s, and was last refurbished in 2009. It continues to provide food and lodging into the 21st Century, and is now owned by Jack Thompson, owner of the Thompson auto dealerships in Doylestown, Pennsylvania.

In 1835, a covered bridge was built across the Delaware River to Raven Rock, New Jersey. The river is approximately 800 feet wide at this point. One span of it was carried away in the flood of 1903. That section of the bridge was rebuilt as a steel span. The bridge was used until 1946. In 1949, a new bridge was built on the piers of the original, but it was built only for foot traffic so that the people of Lumberville could have access to the Pennsylvania Railroad commuter passenger service in Raven Rock. See: Lumberville-Raven Rock Bridge. The rail service was discontinued in 1952.

The Delaware Division of the Pennsylvania Canal runs along the river between Lumberville and the river. Lumberville was the location of Lock #12, a set of locks to raise and lower the barges that travelled between Easton, Pennsylvania and Bristol, Pennsylvania. The lock house was washed away in the flood of 1955.

From 1839 to 1840, Lumberville was the home of John Greenleaf Whittier.

Lumberville was also the birthplace of the 19th-century artist Martin Johnson Heade.

Paul and Julia Child were married in Lumberville on September 1, 1946.

The Lumberville Historic District was listed on the National Register of Historic Places in 1984.

All content from Kiddle encyclopedia articles (including the article images and facts) can be freely used under Attribution-ShareAlike license, unless stated otherwise. Cite this article:
Lumberville, Pennsylvania Facts for Kids. Kiddle Encyclopedia.