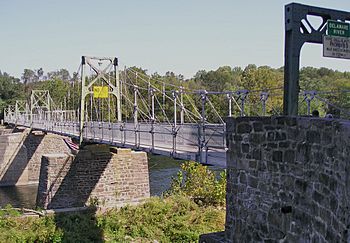 The Pennsylvania and New Jersey legislatures approved the construction of a bridge at Lumberville in 1835-1836, however construction was not begun until 1853. This delay spared the bridge the possible ravages of a major flood in 1841. The bridge, with four spans crossing the river and another crossing the Delaware Canal, was a wooden covered type, engineered by Solon Chapin of Easton, Pennsylvania and a partner, Anthony Fry. The bridge was built by the Lumberville Delaware River Bridge Company and completed in 1856.

The original covered bridge incurred major damage in the flood of 1903 and one of the three river spans was washed away. Repairs were made and the single missing span was replaced in 1904 by a steel truss section. The toll bridge was sold to the DRJTBC in 1932. The replacement span served until February 1944 when the remaining timber spans were declared unsafe and condemned. The Joint Toll Bridge Commission determined at this time that there was no longer a need for a vehicular bridge at the site and in 1947 the Trenton, New Jersey firm of John A Roebling's Sons, Co. was hired to replace the structure with a pedestrian bridge. The original 1855 piers and abutments were deemed sound and at a total cost of $75,000 the bridge was rebuilt as a five span suspension bridge. A major flood in 1955 destroyed several Delaware River bridges but the Lumberville-Raven Rock bridge survived and remains in use today.

A major rehabilitation contract was completed in 1993. The project included a new deck, new lighting and repainting.

All content from Kiddle encyclopedia articles (including the article images and facts) can be freely used under Attribution-ShareAlike license, unless stated otherwise. Cite this article:
Lumberville–Raven Rock Bridge Facts for Kids. Kiddle Encyclopedia.