Yardley is a borough in Bucks County, Pennsylvania, United States. The small community of Yardley is bordered by the Delaware River and Ewing, New Jersey on the east, and by Lower Makefield Township on the north, west, and south. The population was 2,434 at the 2010 census.

The Delaware Canal and its towpath bisect the borough from northwest to southeast. Access points to the canal are located at Edgewater Avenue, Afton Avenue, Fuld Avenue, College Avenue and South Canal Street.

Yardley was founded by William Yardley, who emigrated to America in July, 1682 with his family. He made an agreement with William Penn, before leaving England, to buy 500 acres (2.0 km2) for ten pounds. A survey was completed in October 1682, and the area William Yardley settled was called "Prospect Farm." It was located just outside the present Yardley Borough. William Yardley died in 1693, and his family in 1702-1703, possibly of smallpox. The family's burial plots are located in Slate Hill Cemetery, one of the oldest Quaker burial grounds in the state. Video

A nephew, Thomas Yardley, came to America in 1704 to settle the estate and never returned to England. He opened a ferry line which started operating in 1710 from Letchworth Avenue, the lower boundary of the village, and landed in New Jersey further downstream. This was an important link between West Jersey and the three roads leading to Philadelphia by way of Falls, Langhorne and Newtown. The Yardley family occupied the land for more than 150 years.

When Yardley was founded there were already small settlements at nearby Burlington, Bristol, and Falls Ferry.

Yardley began to develop into a village about 1807, and by 1880 had a population of 820. Early industries included a spoke and handle factory, sawmill, felloe factory, plate and plaster mill, and two flour mills. The first post office, established in 1828, used the name "Yardleyville." The name became "Yardley" again at the time the Reading Railroad came through the area in 1876.

During the American Civil War, Yardley was a station for the Underground Railroad, an escape route for slaves. Known hiding places were under the eaves of the Continental Hotel (now the Continental Tavern), in bins of warehouses on the Delaware Canal (completed in 1862), and at the General Store (now Worthington Insurance). At Lakeside, the yellow house facing Lake Afton on N. Main St., one brick-walled cellar room is also thought to have been a hiding place.

Yardley Borough was incorporated on March 4, 1895.

The Train Collectors Association, which now boasts worldwide membership of 30,000 individuals, was founded in Yardley in 1954.

The former Bridge in Yardley Borough, Washington Crossing State Park, and Yardley Historic District are listed on the National Register of Historic Places.

On June 6, 1866, reports of a wolf-like creature attacking a group of canal boat travelers were filed with the local authorities (these documents are preserved today at Yardley Borough Hall). Sightings of the wolf have increased over the years, although the stories remain questionable. The only known photo was taken in 1978 by local Yardley resident Theodore Sheffield. The photo shows what appears to be a large wolf-like creature. Today, most of the residents reject such claims and attribute the wolf to myth and folklore. 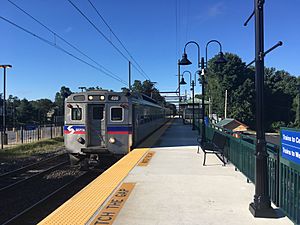 The Philadelphia to Bound Brook, New Jersey, two-track main line of the Philadelphia and Reading Railroad passed through (and stopped) at Yardley, It crossed the Delaware River on a still standing massive stone viaduct called the West Trenton Railroad Bridge. This line now is SEPTA Regional Rail's West Trenton Line and operates also as a CSX freight line called the Trenton Subdivision. SEPTA trains along the West Trenton Line stop at the Yardley station. Prior to the 1950s, the Baltimore and Ohio Railroad's New York City-bound trains from Washington, D.C., (Royal Blue, Capitol Limited, National Limited, Ambassador, and others) used the Reading's trackage to Bound Brook as did the Reading's Crusader.

All content from Kiddle encyclopedia articles (including the article images and facts) can be freely used under Attribution-ShareAlike license, unless stated otherwise. Cite this article:
Yardley, Pennsylvania Facts for Kids. Kiddle Encyclopedia.