Ewing Township is a township in Mercer County, New Jersey, United States. The township is within the New York metropolitan area as defined by the United States Census Bureau. It also directly borders the Philadelphia metropolitan area and is part of the Federal Communications Commission's Philadelphia Designated Market Area. As of the 2010 United States Census, the township's population was 35,790, reflecting an increase of 83 (+0.2%) from the 35,707 counted in the 2000 Census, which had increased by 1,522 (+4.5%) from the 34,185 counted in the 1990 Census. 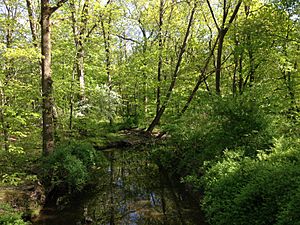 The earliest inhabitants of present-day Ewing Township in the historic era were Lenni Lenape Native Americans, who lived along the banks of the Delaware River. Their pre-colonial subsistence activities in the area included hunting, fishing, pottery-making, and simple farming. Europeans, mostly from the British Isles, began to colonize the area in the 17th and 18th centuries. One of the earliest European settlers was William Green, and his 1717 farmhouse still stands on the campus of The College of New Jersey.

The area that is now Ewing Township was part of Hopewell Township in what was a very large Burlington County at the beginning of the 18th century. In 1714 Hopewell was removed from Burlington County and added to Hunterdon County. By 1719, the area which was to become Ewing Township had been removed from Hopewell Township and added to the newly created Trenton Township. Portions of Trenton Township were incorporated as Ewing Township by an act of the New Jersey Legislature on February 22, 1834, posthumously honoring Charles Ewing for his work as Chief Justice of the New Jersey Supreme Court. The township became part of the newly created Mercer County on February 22, 1838. After incorporation, Ewing Township received additional territory taken from Lawrence Township and the city of Trenton in 1858. In 1894 the city of Trenton took back some of that territory, annexing more in 1900.

When Ewing Township was incorporated in the 19th century, it was primarily farmland with a handful of scattered hamlets, including Carleton (now known as Ewing), Cross Keys (now known as Ewingville), Birmingham (now known as West Trenton) and Greensburg (now known as Wilburtha). Since the beginning of the 20th century, the township has developed as a suburb of Trenton. The sections near the city border are distinctly urban, but most of the township is suburban residential development. The main commercial district extends along North Olden Avenue Extension (County Route 622), originally constructed to connect north Trenton residences with the now-closed General Motors Inland Fisher Guide Plant. Ewing Township today is the location of The College of New Jersey, the Community Blood Council of New Jersey, New Jersey State Police headquarters, the Jones Farm State Correction Institute, the Trenton Psychiatric Hospital, the New Jersey Department of Transportation headquarters, the Katzenbach School for the Deaf and Trenton-Mercer Airport.

From 1953 until 1997 Ewing was the home of Naval Air Warfare Center Trenton, encompassing 528 acres (214 ha) on Parkway Avenue. It was used as a jet engine test facility for the US Navy until its closure based on the recommendations of the 1993 Base Closure and Realignment Commission. Nearly 700 civilian positions were eliminated, most of which were relocated to other facilities in Maryland and Tennessee. The base's Marine operations were transferred to Fort Dix, which has since become Joint Base McGuire-Dix-Lakehurst. A charity to end homelessness acquired the base at no cost in October 2013 in a process involving the United States Department of Defense, the United States Department of Housing and Urban Development, Mercer County and Ewing Township.

The first location of an industrial robot used to replace human workers was at Ewing's Inland Fisher Guide Plant in 1961, a facility that operated in the township for 1938 to 1998, after which the plant was demolished and targeted for redevelopment. 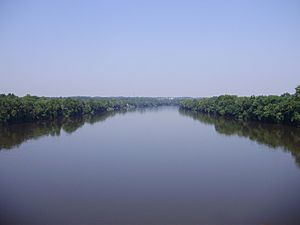 The Delaware River forms the western border of Ewing Township

The highest elevation in Ewing Township is 225 feet (69 m) AMSL just east of Interstate 95 and just west of Trenton-Mercer Airport, while the lowest point is just below 20 feet (6.1 m) AMSL along the Delaware River near the border with Trenton.

The largest body of water completely within the township is Lake Sylva, a man-made lake that was created in the 1920s when an earthen dam was constructed across the Shabakunk Creek. The 11-acre (4.5 ha) lake is located on the campus of The College of New Jersey. Water courses in Ewing include the Delaware River along its western boundary and the Shabakunk Creek in the eastern and central portions of the township. 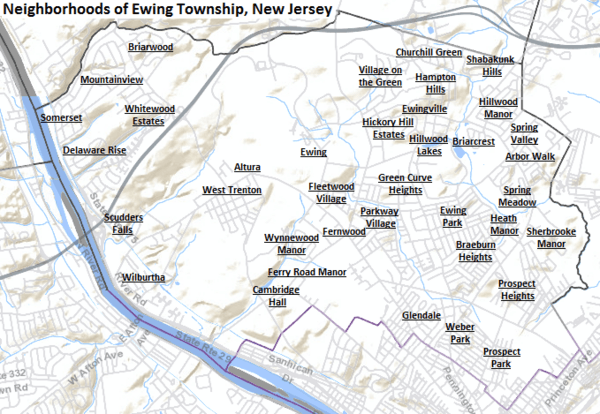 Ewing Township is traversed by multiple main roadways, as well as by a passenger rail line and is the location of an airport. 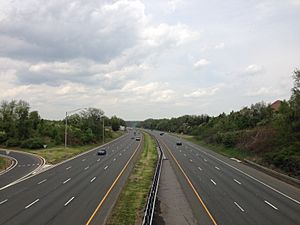 Interstate 95 (the Scudder Falls Freeway and Bridge) crosses the northwestern section of the township. It is a 55 to 65 miles per hour (89 to 105 km/h), 4-6 lane divided freeway facility. It was constructed as a 4-lane facility in the 1960s, and widened to 6 lanes in the 1990s, with the exception of the Scudder Falls Bridge over the Delaware River. It connects south with Philadelphia, Pennsylvania and connects north to U.S. 1, where this branch of Interstate 95 ends and becomes Interstate 295. From there, travelers use U.S. 1 or Interstate 195 and the New Jersey Turnpike to reach the next major destination northwards, New York City. The Ewing portion of Interstate 95 will eventually be redesignated as Interstate 295 when a direct interchange between Interstate 95 in Pennsylvania and the Pennsylvania Turnpike is completed, re-routing Interstate 95 onto the New Jersey Turnpike at Exit 6 (in Mansfield Township).

U.S. Route 206 (Princeton Avenue) skirts the southeastern section of the township. It is a 25 miles per hour (40 km/h), undivided four-lane facility. Although part of US 206, it is actually maintained by the Mercer County Department of Transportation as part of County Route 583, which is co-signed with US 206. US 206 also connects south to Trenton, and connects north to Princeton and Somerville. 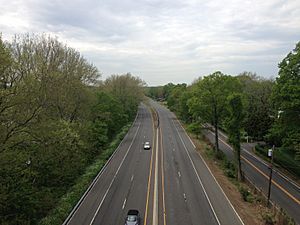 Signage for the Delaware River Scenic Byway along NJ 29

Route 29 (Daniel Bray Highway and River Road) extends north-south along the western edge of the township, along the Delaware River. The southern section, Daniel Bray Highway, is a 55 mph (90 km/h), divided four-lane facility with at-grade intersections and traffic lights, and was constructed in the 1950s. The northern section, River Road, is a 45 mph (70 km/h), undivided two-lane facility whose construction as a state highway dates from the 1930s. NJ 29 connects southwards to Trenton, and northwards to Lambertville and Frenchtown. The entire section of Route 29 in Ewing is designated the Delaware River Scenic Byway, a National Scenic Byway. Route 175 serves as a frontage road along the divided portion of Route 29.

Route 31 (Pennington Road) extends north-south towards the eastern side of the township. It is a 35-45 mph (60–70 km/h), undivided four-lane facility whose construction as a state highway also dates to the 1930s. It once also carried a trolley line, but it has long since been removed. It was once proposed to be bypassed by a freeway, but this plan has since been cancelled. NJ 31 also connects south to Trenton, and connects north to Pennington, Flemington, and Clinton. 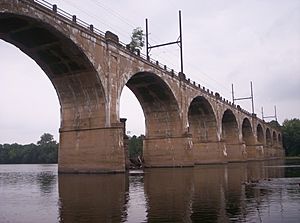 The West Trenton Railroad Bridge across the Delaware River.

Ewing Township is the site of the Trenton-Mercer Airport (TTN), which first opened in 1929 and is one of three commercial airports in the state. The airport has 100,000 takeoffs and landings annually, and is served by Frontier Airlines, which offers nonstop service to and from 10 different locations nationwide. 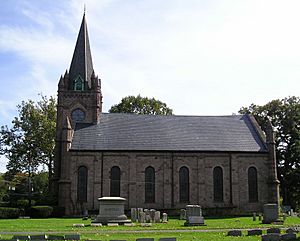 All content from Kiddle encyclopedia articles (including the article images and facts) can be freely used under Attribution-ShareAlike license, unless stated otherwise. Cite this article:
Ewing Township, New Jersey Facts for Kids. Kiddle Encyclopedia.