The city of Sacramento grew up in the mid-nineteenth century as a development from Sutter's Fort. However, the Fort was some distance from the Sacramento River, which was the main means of transport to the coast of California, and the area that would become the modern city developed along the waterfront.

Before Sacramento's extensive levee system was in place, the area flooded quite regularly. Because of this, the city's streets were raised a level. Most of the sidewalks and storefronts have been filled in; however, many tunnels still remain throughout Old Sacramento and the downtown area.

By the 1960s, the area had fallen into disrepair and disrepute. A large effort was made to secure the area's future as an outdoor living history center similar to Colonial Williamsburg in Virginia. Several historically significant buildings were moved or reconstructed. Those that were beyond repair were demolished.

Today, the Old Sacramento Historic District covers the area between the river frontage and Interstate 5, between I Street and the Capitol Mall. The State Historic Park comprises about a third of the total acreage of the district including half of the waterfront, a large grassy area and railroad features. Virtually all the buildings in this area date from the 19th century, the most notable dating back to the period immediately after the disastrous fire of 1852, and show a reasonable approximation of their original appearance, though they have required varying degrees of reconstruction to restore to them to that state. However, few if any still serve their original purpose, most of them now house restaurants, gift shops, or other businesses catering to tourists. 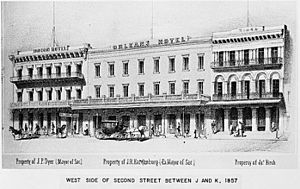 While the architecture from this period is commonly attributed to Victorian gold miners, characteristics of West End, such as multi-storied buildings, large arched doorways, full-height balcony windows and the use of decorative wrought-iron balconies, were most ubiquitous in parts of Spain and the Spanish colonies. This influence may be attributed to the fact that the period of Spanish, then Mexican, rule in California enjoyed immigration from all over the Atlantic, including Spain and the Canary Islands, and the Spanish colonies.

While the architectural style of Old Sacramento, with its wrought iron balconies and evenly spaced full-height windows may remind one of Paris, Sacramento's oldest buildings predate the Haussmann Projects that renovated large areas of Paris in that style. 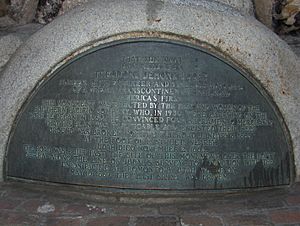 The district contains many memorials to the founders of the city and of the California and transcontinental railroad and other transport systems, including the Theodore Judah monument and the Pony Express Statue.

Other attractions available for visitors include rides in horse-drawn carriages, historic trains from the former Central Pacific Railroad passenger station, and cruises on historic riverboats. A historic sternwheel riverboat, the Delta King, is moored in the river and serves as a hotel, restaurant and theater. Riverfront Park located north of J street allows access to the waters edge.

The Sacramento Valley Rail Station is just a short walk away.

The Old Sacramento Historical Foundation manages several programs to highlight the history of the city, including historical reenactments by costumed docents, as well as tours of Old Sacramento's underground level. During October, there is also a special Halloween themed ghost tour.

Every Labor Day weekend, Old Sacramento holds its annual Gold Rush Days. During this time, the paved streets are covered with several tons of dirt and automobile traffic is barred from the area. Old Sac's regular corps of costumed docents is supplemented by extra volunteers and professional reenactors to recreate life in Sacramento as it was in the mid to late 1800s.

All content from Kiddle encyclopedia articles (including the article images and facts) can be freely used under Attribution-ShareAlike license, unless stated otherwise. Cite this article:
Old Sacramento State Historic Park Facts for Kids. Kiddle Encyclopedia.