The California State Railroad Museum is a museum in the state park system of California, United States, interpreting the role of the "iron horse" in connecting California to the rest of the nation. It is located in Old Sacramento State Historic Park at 111 I Street, Sacramento.

The museum features 21 restored locomotives and railroad cars, some dating back to 1862. The "Sierra Scene" shows a large scale mockup of a construction scene high in the Sierra Nevada representing Donner Pass circa 1867, featuring the locomotive Gov. Stanford. Other exhibits show how the influence of railroads changed American society, influencing travel, commerce and daily life, as well as the lives of railroaders and the diversity of people who work on railroads. Changing exhibits featuring photography, ephemera, and artifacts from the museum's collection, add depth and incidental information to the overall story of railroad history. The Museum has an extensive educational program for elementary students from across the region to help them learn about railroad history using re-enactments, costumed docents, and including train and handcar rides. The roundhouse area of the museum features a rotating display of locomotives and equipment belonging to the museum. When not on display, these items are stored and worked on at the nearby Sacramento Railyards in the remaining buildings that were part of the original Southern Pacific Shop complex. A large 3-rail O-gauge model train layout is also located in the museum.

Adjacent to the main museum building is a reconstruction of the 1870s-era Central Pacific Railroad passenger station and freight depot on Front Street, which houses historic and contemporary railroad equipment. In early 2011, the interior remained closed to public use, but is occasionally open for special events. Between April and October, the Sacramento Southern Railroad, operated by the museum, takes passengers on a 40-minute, 6-mile (9.7 km) roundtrip route along the Sacramento River on a portion of the Walnut Grove branch of the former Southern Pacific Railroad. The Sacramento Southern Railroad owns the Walnut Grove Branch right-of-way that extends south from Sacramento along the eastern bank of the Sacramento River. A few miles of track were rebuilt along the levee near Freeport, California as part of a US Army Corps of Engineers project. The CSRRM hopes to one day have a longer excursion line, perhaps as far as Hood, California. At that location the railroad passengers could disembark the train and take a tourist steamboat back up the Sacramento River to Old Sacramento.

In 1992, Railtown 1897 in Jamestown began operating under the museum.

The museum has its origins in 1937, when a group of railroad enthusiasts in the San Francisco Bay Area formed the Pacific Coast Chapter of the Railway & Locomotive Historical Society. This organization worked for years to promote the idea of a railroad museum, donating 30 historic locomotives and cars to the California Department of Parks and Recreation to be the nucleus of a State-operated museum in Sacramento. The Museum's first facility, the Central Pacific Railroad Passenger Station, opened in 1976. The Railroad History Museum was completed in 1981. Steam-powered passenger train service on the Sacramento Southern Railroad began in 1984, with the Central Pacific Railroad Freight Depot opening three years later. Railtown 1897 State Historic Park in Jamestown was added to the Museum complex during 1992. The museum became a Smithsonian affiliate in June 2017. 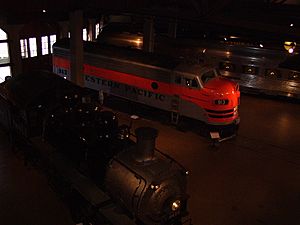 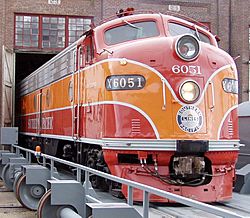 All content from Kiddle encyclopedia articles (including the article images and facts) can be freely used under Attribution-ShareAlike license, unless stated otherwise. Cite this article:
California State Railroad Museum Facts for Kids. Kiddle Encyclopedia.