Railtown 1897 State Historic Park, and its operating entity, the Sierra Railway, is known as "The Movie Railroad." Both entities are a heritage railway and are a unit of the California State Park System. Railtown 1897 is located in Jamestown, California. The entire park preserves the historic core of the original Sierra Railway of California (later reincorporated as the Sierra Railroad). The railway's Jamestown locomotive and rolling stock maintenance facilities are remarkably intact and continue to function much as they have for over 100 years. 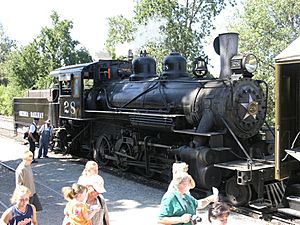 In addition to seasonal steam and diesel-powered train rides, the Railtown experience includes tours of the locomotive roundhouse originally built in 1910, the machine shop, and related exhibits. Movie paraphernalia used in filming train sequences is on display.

Volunteer opportunities are available to help preserve and educate the public about the park. Duties include giving tours of the roundhouse as well as delivering speeches about the locomotives and the surrounding areas while on a short train-ride tour.

Since 1929, when The Virginian was filmed with the Sierra No 3, the Sierra Railway properties have been a major resource to the motion picture industry. Over 200 movies, TV shows, and commercials have featured Railtown and its trains. Sierra's tracks, locomotives and cars have long been seen on the silver screen; film credits include Go West with the Marx Brothers, High Noon with Gary Cooper and Grace Kelly, 3:10 To Yuma (1957) featured #3 in the end of the movie, as well as Back to the Future Part III with Michael J. Fox and Christopher Lloyd. Television programs that regularly used the Sierra property include Wild, Wild West, Iron Horse, Tales of Wells Fargo, and perhaps most famously, Petticoat Junction. The Sierra No. 3 locomotive and Sierra's coach number 5 were the Hooterville Cannonball. Locomotive No. 3 was also used in numerous episodes of Little House on the Prairie. 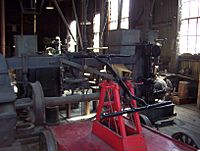 The Railtown 1897 State Historic Park was one of the 48 California state parks proposed for closure in January 2008 by California's Governor Arnold Schwarzenegger as part of a deficit reduction program, though it did not close.

In May 2011, California State Parks announced the closure of Railtown 1897 along with 69 other parks. The closing was anticipated in July 2012, but due to the efforts of locals and enthusiasts, Railtown 1897 will be open indefinitely, and has received funding to make major repairs to the Sierra No. 28, a steam locomotive original to the Sierra Railway and a mainstay of passenger operations for the park.

All content from Kiddle encyclopedia articles (including the article images and facts) can be freely used under Attribution-ShareAlike license, unless stated otherwise. Cite this article:
Railtown 1897 State Historic Park Facts for Kids. Kiddle Encyclopedia.