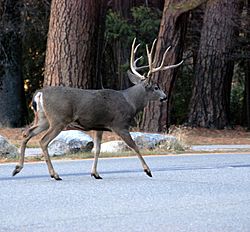 The California mule deer (Odocoileus hemionus californicus) is a subspecies of mule deer whose range covers much of the state of California.

One of the principal means of distinguishing the closely related black-tailed deer and white-tailed deer is the growth habit of the buck's antlers. In the case of the Black Tail and California mule deer, the antlers fork in an upward growth, whereas the other species' antlers grow in a forward direction.

This subspecies, O. h. californicus, is widespread throughout northern and central California in the California coastal prairie, as well as inner coastal ranges and interior mountains, especially the Sierra Nevada. This deer is much less frequently found on the floor of the interior valleys, and then mostly frequently in riparian zones.

Generally, the California mule deer has a preference for hill terrain, especially an oak woodland habitat. It is a browser and typically takes over 90% of its diet from shrubs and leaves and the balance from grasses.

California mule deer usually browse close to lakes or streams providing their water. From that water source, they may roam 1-2 mi, and typically make their beds in grassy areas beneath trees within such a one-mile radius from both water and forage.

In summer, California mule deer mainly browse on leaves of small trees, shrubs, and herbaceous plants, but also consume many types of berries (including blackberry, huckleberry, salal, and thimbleberry). In winter, they may expand their forage to conifers (particularly twigs of Douglas fir), aspen, willow, dogwood, juniper, and sage. Year-round, they feed on acorns; grasses are a secondary food source. Where humans have encroached on historic deer habitat by suburban development or orchards, California mule deer diversify their diet with garden plant material, tree fruit, and occasionally, pet food.

Fawns and does tend to forage together in familial groupings, while bucks tend to travel singly or with other bucks. California mule deer browse most actively near dawn and dusk, but also forage at night in open agricultural areas or when experiencing hunting pressure. 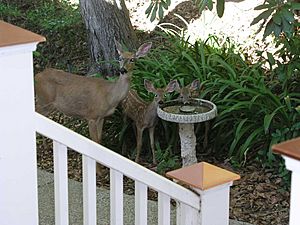 A doe and her fawns in Auburn, California

Rutting season occurs in autumn when the does come into estrus for a period lasting only several days. Males exhibit aggressive behavior in competing for mates. Does begin estrus again if they do not become pregnant. The gestation period is about 200 days, with fawns arriving in the spring; the young remain with mothers throughout the summer and are weaned in the autumn. The buck's antlers fall off in the winter, and commence growing once more in spring in anticipation of next autumn's rut. 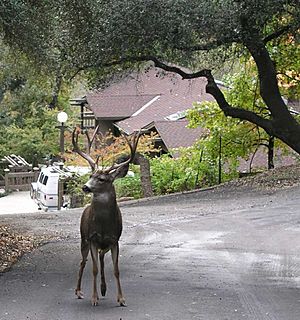 A buck during the rut in rural Auburn

In the modern era, since European colonists and Euro-Americans settled in California, hunting pressure intensified as the human population expanded and hunting became an activity not just associated with food supply. In addition, human population growth (through urban development) in California has consumed large amounts of natural habitat of the California mule deer starting in the late 19th century and continuing through the present.

All content from Kiddle encyclopedia articles (including the article images and facts) can be freely used under Attribution-ShareAlike license, unless stated otherwise. Cite this article:
California mule deer Facts for Kids. Kiddle Encyclopedia.