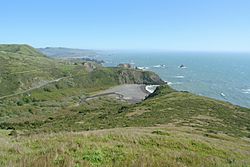 California coastal prairie, also known as northern coastal grassland, is a grassland plant community of California and Oregon in the temperate grasslands, savannas, and shrublands biome. It is found along the Pacific Coast, from as far south as Los Angeles in Southern California up into southern Oregon.

California's coastal prairies are the most species-rich grassland types in North America (Stromberg et al. 2002) with at most, 26 species present per square meter. Coastal prairie is also the single most urbanized major vegetation type in the U.S.; 24 percent of the habitat has been lost to pavement.

Wind, salt spray, fire, and grazing are evolutionary disturbances which affected shrubs and tree growth maintaining more open grasslands. In the absence of grazing and/or fire, many areas of coastal prairie are being lost to shrub and tree encroachment. The accumulated organic matter from centuries produce a rich, dark prairie soil (mollisol). Coastal prairie often forms a landscape mosaic with the Northern coastal scrub plant community. Coastal prairies also often form coastal terraces which can occur without a major successional event such as fire or grazing. These terraces are often used for human services such as agriculture and can be seen in areas such as Santa Cruz and San Luis Obispo.

Characteristic species of this community include:

Many of the rarest plant species in the coastal prairie exist mainly on land currently being grazed by livestock; these species have been disappearing when land is set aside for conservation and the livestock are removed.

Rare and endangered species found in the coastal prairie include:

Unlike many other Mediterranean climate grasslands, the mostly perennial bunch grasses stay green all summer, which makes the coastal prairies attractive for grazing cattle and sheep. Other effects to this plant community include agriculture and development. California's coastal prairie, like most other California grasslands, has been greatly affected by the invasion of non-native species, including earthworms, snails, slugs, pill bugs, earwigs, and annual Mediterranean grasses.

Most recently, invasive perennial grasses are the greatest threat. These include velvet grass (Holcus lanatus), tall fescue (Festuca arundinacea), and Harding grass (Phalaris aquatica); the impact of these species can be somewhat ameliorated by well-planned livestock grazing, which can reduce these species' cover and allow native species to persist. Woody species also pose an invasion threat. These include hypericum perforatum, gorse, and broom.

California's coastal prairies are protected by the California Coastal Act, which considers these habitat types to be Environmentally Sensitive Habitat Areas (ESHA). Akin to the endangered species act for habitat types on California's coast, ESHA protections disallow any harm to so designated habitats, except where such harm is necessary to otherwise restore the habitat as a whole (e.g., prescribed fire, grazing).

Coastal Prairies of California are classified as critically endangered with the following stressors causing the most impacts: invasive species, low nutrient soils, urbanization, and unregulated recreational activities. There are also a number of abiotic factors which make this environment extremely hard to tolerate from a plant’s perspective such as constant sun exposure, high salt deposits, strong winds, and abrasion damage or complete submersion from sandy dunes or beaches. Both impacts of high winds and salinity are damaging to plants, acting as an accelerated corrosive agent to those who are especially not fit or adapted for such conditions. Historically, applications for sand stabilization resulted in positive feedbacks within the system, thus spurring an optimal habitat for invasive species to flourish.

All content from Kiddle encyclopedia articles (including the article images and facts) can be freely used under Attribution-ShareAlike license, unless stated otherwise. Cite this article:
California coastal prairie Facts for Kids. Kiddle Encyclopedia.