Holcus lanatus is a perennial grass. The specific epithet lanatus is Latin for 'woolly' which describes the plant's hairy texture. Common names include Yorkshire fog, tufted grass, and meadow soft grass. In North America, where it is an invasive species, names include velvet grass and common velvet grass.

In parts of northern Europe the grass is a common native species and a hardy pasture grass. 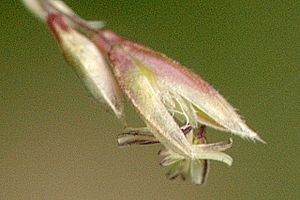 Holcus lanatus has velvety grey-green leaves. The stems are round. The bases of the stems are white with pink stripes or veins; this character has been called the "stripy pyjamas". The inflorescence is robust and often tinged purple. It produces a large amount of seed and is a rapid coloniser of disturbed ground. It prefers wetter ground; it is often seen around drainage ditches. The ligule is 1–4 millimetres (0.039–0.157 in) long, blunt, and hairy.

This species can be distinguished from H. mollis by the beardless nodes on its culm, the absence of rhizomes, and the awn becoming hooked when dry and not projecting beyond the tips of the glumes. It has been known to hybridize with H. mollis, producing a male sterile hybrid with 2n = 21 chromosomes. Hybrids tend to resemble H. lanatus in their morphology.

It spreads vegetatively by developing new shoots and roots at its nodes. Plants form a blanket of runners on the soil surface. Semi-prostrate rosettes of shoots called 'mops' may form at the end of the runners. These mops root readily in contact with moist soil.

Holcus lanatus in its natural habitat is a food source for butterflies such as the speckled wood, the wall, and especially the small skipper. It is rarely utilized by the Essex skipper. In its native range it may occur in plant associations such as the Juncus subnodulosus–Cirsium palustre fen-meadow habitat.

All content from Kiddle encyclopedia articles (including the article images and facts) can be freely used under Attribution-ShareAlike license, unless stated otherwise. Cite this article:
Holcus lanatus Facts for Kids. Kiddle Encyclopedia.