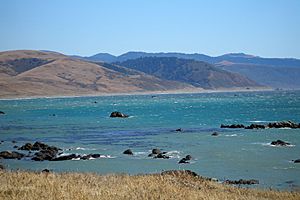 The coast at Cape Mendocino in California

Cape Mendocino is a geographic feature of the northern Californian coastline. It is the westernmost point of the coast of California in Humboldt County.

The cape was named in the 1540s. The name honors Antonio de Mendoza. He was the Viceroy of New Spain.

This It has been known as a landmark since the 16th century. Spanish ships crossed the Pacific Ocean by following the Pacific trade winds. The North Equatorial Current brought them to the North American coastline. After landfall, the Manila galleons would sail down the coast to Acapulco in Mexico.

Hasekura Tsunenaga's sailed from Japan to Cape Mendocino in 1613. Hasekura was on a diplomatic mission. He was traveling to the courts of Philip II of Spain and Pope Paul V.

The Cape Mendocino region is an active earthquake zone. In April 1992, three big earthquakes were centered near the cape.

The Mendocino Triple Junction is to the west of Cape Mendocino under the Pacific Ocean. It is a geologic triple junction where three tectonic plates come together. The San Andreas Fault, a transform boundary, runs south from the junction, separating the Pacific Plate and the North American Plate. To the north is the Cascadia subduction zone, where the Gorda Plate is being subducted under the edge of the North American plate. Running west from the triple junction is the Mendocino Fracture Zone, the transform boundary between the Gorda Plate and the Pacific Plate.

All content from Kiddle encyclopedia articles (including the article images and facts) can be freely used under Attribution-ShareAlike license, unless stated otherwise. Cite this article:
Cape Mendocino Facts for Kids. Kiddle Encyclopedia.