The Cahto (also spelled Kato, especially in anthropological and linguistic contexts) are an indigenous Californian group of Native Americans. Today most descendants are enrolled as the federally recognized tribe, the Cahto Indian Tribe of the Laytonville Rancheria, and a small group of Cahto are enrolled in the Round Valley Indian Tribes of the Round Valley Reservation.

Cahto is a Northern Pomo word, meaning "lake", which referred to an important Cahto village site, called Djilbi. The Cahto are sometimes referred to as the Kaipomo or Kato people. 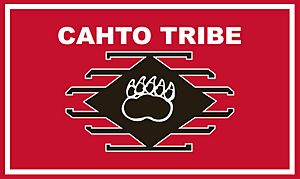 Flag of the Cahto people

The Cahto flag, representing their sovereign nation, features a stylized bear claw outlined in white and centered on a black pictograph representing the Cahto ancestral lake home. The pictograph is centered on a red field surrounded with a white and red border. The Words "CAHTO TRIBE" is written in white block letters above the lake pictograph. The bear claw is placed to indicate the importance of the bear as one of their most important tribal totems. The lake symbol denotes their ancestral lands, the color red indicates the blood of their people, white is for the purity of their spirit, and the black is for the rich lake bottomland that sustained their ancestors. This flag is of modern creation and not traditional. It was adopted in 2013.

The Kato language is one of fourAthabaskan languages that were spoken in northwestern California. The others were Eel River Athabaskan (to which Kato is most similar), Mattole-Bear River, and Hupa-Chilula. Most Kato speakers were also bilingual in Northern Pomo.

The Kato lived farthest south of all the Athapascans in California, occupying Cahto Valley and Long Valley, and in general the country south of Blue Rock and between the headwaters of the two main branches of Eel River. This region comprises rolling hills and oak savannas and is veined with streams. Most of these are nearly dry during the dry summers but are torrential during the rainy winters.

In the early 18th century, the Cahto lived in approximately 50 village sites.

Traditionally, the Cahto made such articles of stone, bone, horn, wood and skin, as were commonly made in northern California. The primitive costume for both men and women was a tanned deer-skin, wrapped about the waist, and a close-fitting knitted cap, which kept in place the knot of hair at the back of the head. At a later period, the Cahto garment included a shirt made of two deer-skins, laced down the front and reaching to the knees. Both men and women generally had tattoos on their faces and the chest: designs consisted largely of upright lines, both broken and straight.

In constructing a Cahto house, a circular excavation about two feet deep was prepared, and in it, at the corners of a square were erected four forked posts. The front pair were a little taller than the other, so that the roof would have a slight pitch to the rear. The roof was so small that it was of much less importance in determining the final shape of the house than was the circularity of the base. The space between the posts were stuffed with bunches of long grasses, and slabs of wood and bark. An opening in the roof served to carry off smoke, and the doorway was a narrow opening in front from ground to roof. As many as three families occupied one of these little houses, with all persons cooking at the same fire. For summer camps, brush lean-tos were set up. The dog was the only domesticated animal.

A favorite pastime for the females was to assemble early in the evening for singing in chorus. One of the best singers would lead, and two others kept time by striking one bone with another. The men took no part but hung around and listened.

Each village had its chief, dog sled, and some villages, a second chief. Generally, the chief’s son succeeded to the office, but if a headman died without sons, the people, by common consent and without formal voting, selected from among themselves the man whom they regarded as best fitted for the place. The duty of a chief was to be the adviser of his people. When anything of great importance was to be decided, the village chief summoned the council, which comprised all the elder men. Each expressed his opinion, and the chief would go along with the consensus.

Many of the social practices of the Kato tribe show how strongly they were influenced by the culture of northern-central California.

Children of both sexes were required to observe certain rites at the age of puberty. Annually in midsummer, a group of boys, ranging from 12 to perhaps 16 years old, were led out to a solitary place by two men, one of whom was the teacher. Here, they received instructions in mythology and the supposed origin of customs, such as the mortuary rites, shamanistic practices and puberty observances. In the winter, these boys assembled again in the ceremonial house and remained there during the four winter months for instructions on tribal folklore.

At puberty, a girl began to live a very quiet and abstemious life for five months, remaining always in or near the house, abstaining from meat, and drinking little water. She was not permitted to work, lest she catch a cold.

Marriage was arranged between the two persons concerned, without consulting anybody else. Having secured a girl’s consent, her lover would sleep with her clandestinely at night, and at dawn steal away. The secret was preserved as long as possible, perhaps for several days, and the news of the match transpired without formal announcement, even to the girl’s parents, who would learn of their daughter’s marriage in this same, indirect fashion. His marriage no longer a secret, the young man might erect a house of his own.

The bond was as easily loosened, for either could leave the other for any reason, the man retaining any male children and the woman the female children. Children were not regarded as belonging any more to the paternal than to the maternal side. When adultery was discovered, the only result was a little bickering and perhaps an invitation to the offender to take up permanent relations with the new love.

In preparation for burial, a corpse was washed, clothed in good garments, and wrapped in deer skins. A pit was excavated on a dry hillside. The bottom was laid with a floor of poles, covered with bark and several deer skins. On this was deposited the corpse, which was covered with bark before the attendees covered it with earth.

The entire population accompanied the bearers to the grave and wailed loudly. Women, and occasionally men, cut their hair short as a symbol of grief. For persons of prominence, a mourning ceremony would be held in the year following their death. This ceremony marked the end of the mourning period, and those who had hitherto wept became immediately cheerful and smiling.

The religious conceptions of the Kato tribe are grouped around two deities: Chénĕśh or T'cenes, the creator, who is identified with thunder and lightning, and his companion, Nághai-cho or Nagaicho, the Great Traveler. The latter is a somewhat mischievous personage, who in the myth, constantly urges Chénĕśh to acts of creation, while pretending that he has the knowledge and power to perform them, if only he has the desire to do so.

In mythology, as in other phases of their culture, the Kato tribe showed their susceptibility to the double influence to which they had been exposed. With a creation story of the type prevailing in central California, they preceded it with an account of a race of animal-people who were swept from the earth by the deluge — a theme characteristic of North Pacific Coast mythology.

The creator, Chénĕśh, who is identified with lightning, dwelt in the sky. Below was an expanse of water, with a rim of land in the north. With his companion, Nághai-cho, he descended and turned a monstrous deer into land. Chénĕśh created the people, but Nághai-cho made the mountains and the streams. In everything, the latter tried to outdo Chénĕśh, playing the role (usually assigned to coyote) of the buffoon and trickster.

The shamans of the Kato tribe were of three classes:

The ŭtiyíņ became medicine men by instruction, not by supernatural agencies. The two other classes acquired their power solely through dreams. When the old men of a village deemed it advisable to have a new ŭtiyíņ or "sucking doctor", either because of the death of some of the shamans or because of their waning power, the active and the retired shamans selected a promising young man. With his consent, they took him away from the village to a solitary place in the hills. The one who had been selected to be his instructor and "father" would pray and instruct the young man in the secrets of the medicine men.

When a medicine man was summoned, any others of that profession who happened to be nearby could come and observe. If the medicine man first called upon could not effect a cure, he would ask the assistance of another. While engaged in his work, a shaman would beseech the unnamed powers for help, naming the various mountains of the region and asking the spirits resident there to assist him. He would also call on Nághai-cho, and occasionally on Chénĕśh.

All content from Kiddle encyclopedia articles (including the article images and facts) can be freely used under Attribution-ShareAlike license, unless stated otherwise. Cite this article:
Cahto Facts for Kids. Kiddle Encyclopedia.