Point Arena, formerly known as Punta Arena (Spanish for "Point Sand") is a small coastal city in Mendocino County, California, United States. Point Arena is located 32 miles (51 km) west of Hopland, at an elevation of 118 feet (36 m). The population was 449 at the 2010 census, down from 474 at the 2000 census, making it one of the smallest incorporated cities in the state. The Point Arena Census county division had 3,915 residents as of 2010.

Its main street comprises part of State Route 1, California's coastal artery. Along with a number of other Mendocino County coastal communities, Point Arena was associated with the hippie and subsequent counterculture groups. The economy is largely geared toward servicing the summertime tourist industry. The city is near the headquarters of the tribal lands of Manchester Band of Pomo Indians of the Manchester Rancheria and adjacent to the recently formed Point Arena Stornetta Public Lands National Monument. Hiking trails with coastal prairie and ocean views can be accessed from Point Arena City Hall. At Arena Cove Historic District and pier, huge oceanfront bluffs show the power of the interface of tectonic plates.

According to the United States Census Bureau, the city has a total area of 1.4 square miles (3.6 km2), all of it land.

The city itself is built around a small natural cove, used as a harbor, and is located about a 1.5 miles (2.4 km) south of the actual Arena Point, a narrow peninsula jutting around 0.3 miles (0.48 km) into the Pacific Ocean. This is the location of the Point Arena Lighthouse, at 115 feet (35 m) the tallest lighthouse on the West coast of the United States. The lighthouse is also the closest location on the mainland (excluding Alaska) to Honolulu, Hawaii at a distance of 2,353 miles (3,787 km).

A variety of fauna and flora occur in the Point Arena area. The location is also sometimes a range demarcation for occurrence of some species. For example, the Pacific giant salamander occurs at Point Arena and at points south, but not at all to the north.

Sound levels in Point Arena are relatively quiet, with many locations at night-time dominated by natural sounds such as those of the surf. The firm of Earth Metrics Inc., who prepared the Noise Element of the Point Arena General Plan, found that, even considering the presence of logging trucks on main city streets, composite sound levels rarely exceed 55 Leq. The maximum acceptable sound level specified in that General Plan Element is 60 Leq for residential areas. 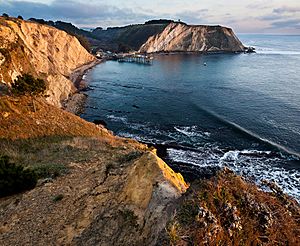 The San Andreas Fault runs out to sea at Point Arena. The 1906 earthquake was strongly felt at Point Arena and caused moderate damage.

The Point Arena area is home to an endangered species of rodent known as the Point Arena mountain beaver (Aplodontia rufa nigra). According to the U.S. Fish and Wildlife Service, the habitat for this sub-species of Mountain Beaver lies only within a 24 sq mi (62 km2) area around Point Arena. The biggest threat to the PAMB is loss of habitat, and it was officially listed as an endangered species on December 12, 1991. Much local folklore revolves around this mysterious creature.

The first European to record Point Arena was Spaniard Bartolomé Ferrer in 1543, who named it Cabo de Fortunas (Spanish for "cape of fortunes"). The cape was renamed to Punta Delgado (narrow point) in 1775 by lieutenant Juan Francisco de la Bodega y Quadra (commander of the schooner Sonora), part of a royal expedition chartered by the government of Mexico to map the north coast of Alta California. Later the point, and the small harbor town south of it, were called Barra de Arena (i.e. sandbar) and finally Point Arena (literally "sand point").

The Point Arena area is also home to the Point Arena Cable Station, although the station is technically located in nearby Manchester. Built in 1956 by AT&T Corporation, the cable station serves as the eastern terminus of several undersea cables, including the JUSCN and connections to Hawaii and Canada. In 2002, AT&T applied for a permit from the EPA to connect an existing fiber optic conduit to the cable station, since further construction would cause incidental damage to the habitat of the endangered Point Arena Mountain Beaver. 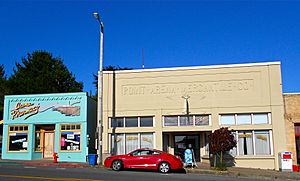 Downtown and the Point Arena Mercantile, 2012 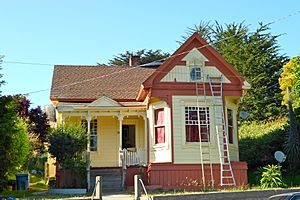 All content from Kiddle encyclopedia articles (including the article images and facts) can be freely used under Attribution-ShareAlike license, unless stated otherwise. Cite this article:
Point Arena, California Facts for Kids. Kiddle Encyclopedia.