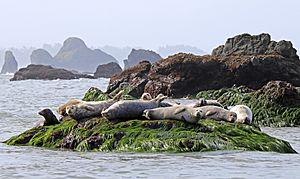 Harbor seals resting on surf grass, in sight of some of the many rocks protected by the California Coastal National Monument 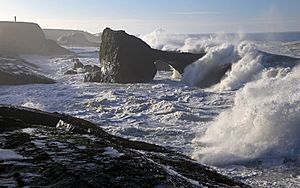 The California Coastal National Monument is located along the entire coastline of the U.S. state of California. This monument ensures the protection of all islets, reefs and rock outcroppings along the coast of California within 12 nautical miles (22 km) of shore along the entire 840-mile (1,350 km) long coastline. Conservative estimates are for at least 20,000 such outcroppings. The monument was created by Bill Clinton via Presidential proclamation on January 11, 2000, with the authority in section two of the Antiquities Act of 1906. As of 2014[update], the monument has expanded to 2,272 acres (919 ha). The U.S. Bureau of Land Management, an agency of the U.S. Department of the Interior that manages the monument, has developed gateways in cooperation with other agencies along the California coast to introduce the monument to the public. These include the Trinidad Gateway, Point Arena Gateway, Fort Bragg-Mendocino Gateway, Pigeon Point Gateway, Piedras Blancas-San Simeon Gateway, and Palos Verdes Peninsula Gateway. The California Coastal National Monument is one of the most-viewed national monuments in California, although people are usually unaware that they are viewing a national monument.

The monument has seen two major expansions since its creation: 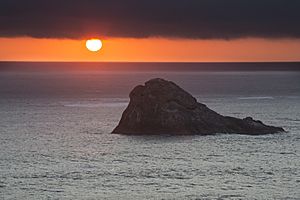 One of thousands of offshore rocks in the CCNM

The California Coastal National Monument Expansion Act of 2017 added five coastal sites: 440 acres (180 ha) at Lost Coast Headlands, 13 acres (5.3 ha) at Trinidad Head, 8 acres (3.2 ha) at Lighthouse Ranch in Humboldt County, 5,780 acres (2,340 ha) from the Cotoni-Coast Dairies in Santa Cruz County and 20 acres (8.1 ha) from Piedras Blancas in San Luis Obispo County. It also would include some small rocks and islands off the coast of Orange County. In January 2017, President Obama used his executive power under the 1906 Antiquities Act to designate these sites as National Monuments.

All content from Kiddle encyclopedia articles (including the article images and facts) can be freely used under Attribution-ShareAlike license, unless stated otherwise. Cite this article:
California Coastal National Monument Facts for Kids. Kiddle Encyclopedia.