Trinidad (Spanish for "Trinity"; Yurok: Chuerey) is a seaside city in Humboldt County, located on the Pacific Ocean 8 miles (13 km) north of the Arcata-Eureka Airport and 15 miles (24 km) north of the college town of Arcata. Situated at an elevation of 174 feet (53 m) above its own North Coast harbor, Trinidad is one of California's smallest incorporated cities by population (367 residents in 2010, up from 311 residents in 2000). Trinidad is noted for its coastline with ten public beaches and offshore rocks, part of the California Coastal National Monument, of which Trinidad is a Gateway City. Fishing operations related to Trinidad Harbor are vital to both local tourism and commercial fishery interests in the region. 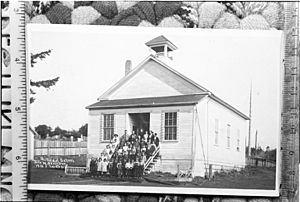 Before 1700 AD, Yurok people established the village of Tsurai on bluffs overlooking Trinidad Bay. The first European sighting of Trinidad Harbor was by the Manila galleon captain Sebastian Rodriguez Cermeño, who did not make landfall. The next visit was by Bruno de Heceta and Juan Francisco de la Bodega y Quadra of the Spanish Navy. Their two ships anchored in Trinidad Bay on June 9, 1775. On 11 June, which was Trinity Sunday, a formal act of possession was conducted. At the place where a wooden cross was erected stands a carved stone cross bearing the inscription. Carolus III Dei G. Hyspaniorum Rex., in the name of King Carlos of Spain. The area was named "la Santisima Trinidad".

Settlers arrived on the James R. Whitting in 1850 and founded the town, renamed Warnersville in honor of R.V. Warner, one of the settlers. The first post office opened in Trinidad in 1851.

Trinidad was the original county seat of the eponymous Trinity County from 1850 to 1851, and of Klamath County, one of California's original counties, from 1851 to 1854. At that time Trinidad became part of the newly created Humboldt County after its creation in 1853, with its county seat in Eureka. Klamath County was finally dissolved in 1874.

During the American Civil War from July to October 1863 California Volunteers fighting the local Indians in the Bald Hills War were stationed in the town, in Trinidad Camp to protect it and the coast road from Indian raids, until they were moved four miles north to Camp Gilmore. Trinidad was incorporated in 1870 as a City of the State of California, USA.

Trinidad resident Henry A. Boyes was a First Sergeant with the Fifth Marines in World War II; his service was described by Eugene Sledge in the book, With the Old Breed: At Peleliu and Okinawa.

Trinidad has an oceanic climate and is relatively temperate compared with inland areas. Annual temperatures range from approximately 40 °F (4 °C) to 60 °F (16 °C). Winter months are rainy with the average amount being around 50 inches (130 cm), Although rain falls in all months of the year, it is less pronounced in the summertime. Spring and fall cold fronts often form advection fog which pushes the marine layer towards the coast. In summer, low pressure troughs produced by intense heating inland can create strong pressure gradients pulling the marine layer ashore. Summer fogs, moderate precipitation, and mild temperatures are characteristic of Northern California coastal forests ecoregion and are vital to the growth of local Coast Redwood. Protected stands of old growth redwoods can be visited 20 miles (32 km) north of Trinidad, in Redwood National and State Parks. 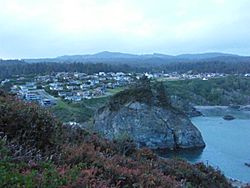 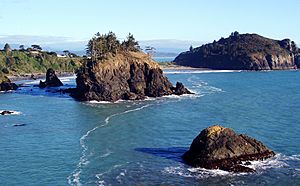 All content from Kiddle encyclopedia articles (including the article images and facts) can be freely used under Attribution-ShareAlike license, unless stated otherwise. Cite this article:
Trinidad, California Facts for Kids. Kiddle Encyclopedia.