The tribe's reservation is split onto Manchester and Point Arena Lands. The coordinates for Manchester Point Arena Community: 38°56'11.4"N 123°40'58.5"W 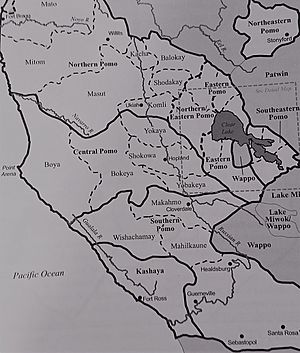 The Bokeya was the largest Pomo tribelet in terms of territorial area. Once there was a bridge connecting these tribes closer than they are now. Point Arena in Mendocino County, California. Now, the size of the rancheria is 364 acres (1.47 km2). 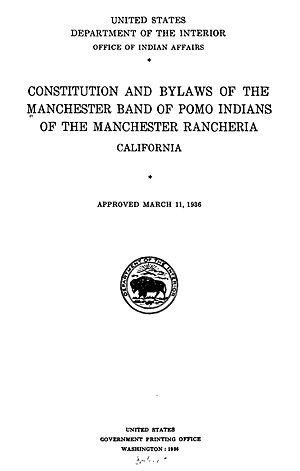 They are one of the few Native American bands who have a written Constitution that is available for the public. After the ratification of Indian Reorganization Act (IRA) in 1934, the Bokeya framed the Constitution and By-Laws. This document provided them jurisdiction over rancheria land as it was written to establish a legal rancheria organization and secure certain privileges and powers offered to the Indians by the IRA. The document has five articles:

The Central Pomo are culturally identified as a Pomo dialect group. The language is under Hokan family. In pre-contact times, the Pomoan languages together probably had around 8000 speakers (Kroeber 1925). Today, there are several speakers of Central Pomo (Golla 2011). 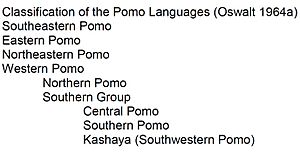 Since they are part of larger Pomo[[1]] band, their cultures and traditions are similar to that of the larger band they are part of. Each kin-group of the aboriginal Bokeya had a men's assembly house where ghost ceremonies were performed. These ceremonies were associated with their secret society and the intent was social integration. Professions such as hunting, fishing, and healing were considered prestigious. Shamans were responsible for driving away individual sickness, and sickness of the community as a whole. They were self-sufficient from the resources from the ocean, rivers, and the forests. They strongly followed a protocol of utilizing the resources, and were sensitive to external people using their resources. They did not completely oppose the idea of sharing resources, but they were strict about following a proper protocol. They had a proper system of exchange and trade. When they had superabundance, feasts were organized among the trade allies. They heavily believed in the dreamers and their dreams that decided religion and ceremonies. The ceremonies were conducted in the dance house. The dream songs were used to suck illness out of the individuals and the society.

Post-contact, Bokeya earned living by partially following traditional methods, and partially by participation in the settlers' way of living. They cultivated lands, grew crops to sell, charged fees on people going to rancheria to fish, and also by working in the logging industries and road work. Post IRA, they obtained a loan of $5000 to start ranch. Due to internal and external conflicts, the ranch failed and was unable to pay the workers. After the failure of the ranch, they returned to their rancheria status. However, they still practiced certain "ceremonial festivities and curing practices".

In the contemporary world, they participate in Pow Wow Singing and Pow Wow Dances. As a part of keeping the Native American culture and traditions alive, various tribes gather in the Pow Wows. They sing songs and perform dances. Since they have different languages, they do not use words, but use "vocables" so that everyone can understand the song and its special meaning. Dances are a significant part of their tradition. The collection of songs and dances that they perform today might not be as vast as in the past, and they might have been modified, but the intent remains the same. Pow Wow [[2]]

All content from Kiddle encyclopedia articles (including the article images and facts) can be freely used under Attribution-ShareAlike license, unless stated otherwise. Cite this article:
Manchester Band of Pomo Indians of the Manchester Rancheria Facts for Kids. Kiddle Encyclopedia.