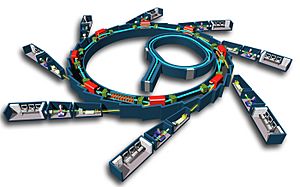 Here, the synchrotron is the circular track, off which the beamlines branch. 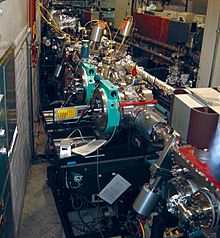 In particle physics, a beamline is the path in a particle accelerator of the particles.

In materials science, physics, chemistry, and molecular biology a beamline leads to the experimental endstation utilizing particle beams from a particle accelerator, synchrotron light obtained from a synchrotron, or neutrons from a spallation source or research reactor.

Beamline in a particle accelerator 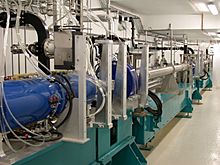 It is impossible to see the beam pipe on this beamline. However the section of the big beam pipe is used with a grid system for alignment with a laser, known as the laser pipe. This particular beamline is approximately 3 kilometers long.

In particle accelerators the beamline is usually housed in a tunnel and/or underground, cased inside a cement housing. The beamline is usually cylindrical metal. Typical names include, beam pipe, and/or a blank section called a drift tube. This entire section must be under a good vacuum in order to have a the beam travel for a long distance.

A survey and alignment crew carefully align the beamline segments by using a laser tracker. All beamlines must be within micrometre tolerance. Good alignment helps to prevent beam loss, and beam from colliding with the pipe walls, which creates secondary emissions and/or radiation. 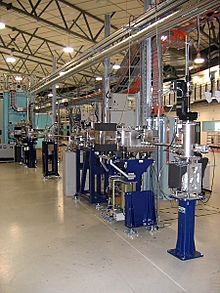 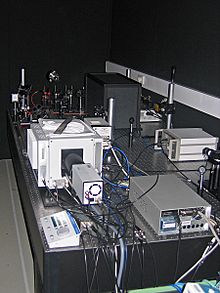 Inside the Optical Diagnostic Beamline (ODB) hutch at the Australian Synchrotron; the beamline terminates at the small aperture in the back wall

A large synchrotron laboratory will have many beamlines, each optimized for a particular field of research. The differences will depend on the type of insertion device (which, in turn, determines the intensity and spectral distribution of the radiation); the beam conditioning equipment; and the experimental end station. A typical beamline at a modern synchrotron will be 25 to 100 m (82 ft to 328 ft) long from the storage ring to the end station, and may cost up to millions of US dollars. For this reason, a synchrotron facility is often built in stages, with the first few beamlines at the start of operation, and other beamlines being added later as the funding permits.

The beamline elements are in radiation shielding enclosures, called hutches, which are the size of a small room (cabin). A typical beamline consists of two hutches, an optical hutch for the beam conditioning elements and an experimental hutch, which houses the experiment. Between hutches, the beam travels in a transport tube. People are not allowed to enter hutches when the beam shutter is open and radiation can enter the hutch. Hutches have complex safety systems with redundant interlocking functions to make sure that no one is inside the hutch when the radiation is turned on. The safety system will also shut down the radiation beam if the door to the hutch is accidentally opened when the beam is on. In this case, the beam is turned off by dumping the electron beam circulating in the synchrotron. So, opening one door will shut down all of the beamlines in the facility.

Experimenters use the following elements that are used in beamlines for conditioning the radiation beam between the storage ring and the end station:

The combination of beam conditioning devices controls the thermal load (heating caused by the beam) at the end station; the spectrum of radiation incident at the end station; and the focus or collimation of the beam. Devices along the beamline which absorb significant power from the beam may need to be actively cooled by water, or liquid nitrogen. The entire length of a beamline is normally kept under ultra high vacuum conditions.

An experimental end station in a neutron facility is called a neutron beamline. Superficially, neutron beamlines differ from synchrotron radiation beamlines mostly by the fact that they use neutrons from a research reactor or a spallation source instead of photons. The experiments usually measure neutron scattering from the sample under study.

All content from Kiddle encyclopedia articles (including the article images and facts) can be freely used under Attribution-ShareAlike license, unless stated otherwise. Cite this article:
Beamline Facts for Kids. Kiddle Encyclopedia.