Peter Ware Higgs CH FRS FRSE (born Newcastle upon Tyne, 29 May 1929) is an English theoretical physicist, and emeritus professor at the University of Edinburgh.

He was awarded the 2013 Nobel Prize in Physics for predicting the existence of the Higgs boson, the "most sought-after particle in modern physics". Higgs shared the prize with François Englert. Higgs was appointed to the Order of the Companions of Honour in 2013.

In the 1960s, he proposed broken symmetry in electroweak theory. This explains the origin of mass of elementary particles in general. It also shows the origin of the W and Z bosons. The theory known as Higgs mechanism was proposed by several physicists at the same time. It proposes the existence of a new particle, the Higgs boson. On 4 July 2012, CERN announced they had found a new particle much like the Higgs boson in experiments, but that more work was necessary to analyse its properties and see if it had the properties expected from the Standard Model Higgs boson.

The Higgs mechanism is generally accepted as an important part of the Standard Model of particle physics, without which particles would have no mass.

Higgs has received a number of awards. These include the 1997 Dirac Medal and Prize for outstanding contributions to theoretical physics, the 2004 Wolf Prize in Physics, and the 2010 Sakurai Prize. 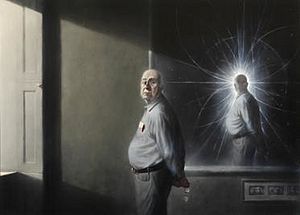 Portrait of Peter Higgs by Ken Currie, 2008, in the entrance of the University of Edinburgh School of Physics and Astronomy

All content from Kiddle encyclopedia articles (including the article images and facts) can be freely used under Attribution-ShareAlike license, unless stated otherwise. Cite this article:
Peter Higgs Facts for Kids. Kiddle Encyclopedia.