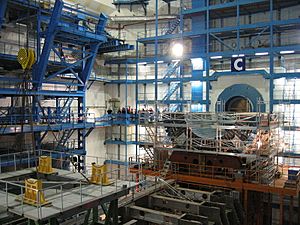 ATLAS experiment detector under construction in October 2004 in its experimental pit; the current status of construction can be seen on the CERN website. Note the people in the background, for comparison.

ATLAS (A Toroidal LHC ApparatuS) is the biggest experiment at the Large Hadron Collider (LHC).

It is one of the seven particle detector experiments (ALICE, ATLAS, CMS, TOTEM, LHCb, and LHCf) built at the LHC. LHC is a new particle accelerator at the European Organization for Nuclear Research (CERN) in Switzerland. ATLAS is 46 metres long and 25 metres in diameter, weighing about 7,000 tonnes. The project is led by Fabiola Gianotti. The project has 2,000 scientists and engineers at 165 institutions in 35 countries. The project began operation on 10 September 2008. ATLAS studies highly massive particles which could not be studied using earlier lower-energy accelerators. ATLAS may start new theories of particle physics beyond the Standard Model.

All content from Kiddle encyclopedia articles (including the article images and facts) can be freely used under Attribution-ShareAlike license, unless stated otherwise. Cite this article:
ATLAS experiment Facts for Kids. Kiddle Encyclopedia.