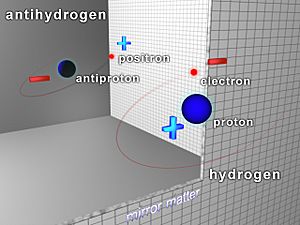 Antihydrogen consists of an antiproton and a positron

"Antihydrogen" can also refer to the molecule called Antihydrogen, which is made of two bonded antiprotons.

All content from Kiddle encyclopedia articles (including the article images and facts) can be freely used under Attribution-ShareAlike license, unless stated otherwise. Cite this article:
Antihydrogen Facts for Kids. Kiddle Encyclopedia.