The Apple Watch is an electronic watch from Apple Inc. It has been available to buy in stores and online since early 2015.

The Apple Watch can do things like measure your heartbeat and works like a walkie-talkie when used together with an iPhone 5 or newer iPhone. It can also access the Internet to download and run apps. Because of this, many people call it a "smartwatch".

The Apple Watch was released on April 24, 2015 and quickly became the best-selling wearable device with 4.2 million sold in the second quarter of the 2015. 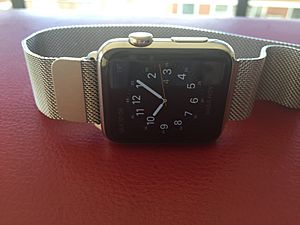 The Apple Watch works with Apple Pay, a mobile payment service that allows you to use your Watch to pay for things. It announced at the same event that the watch was announced. It can control the Apple TV, act as a walkie-talkie, and lets you control the iPhone camera.

All content from Kiddle encyclopedia articles (including the article images and facts) can be freely used under Attribution-ShareAlike license, unless stated otherwise. Cite this article:
Apple Watch Facts for Kids. Kiddle Encyclopedia.