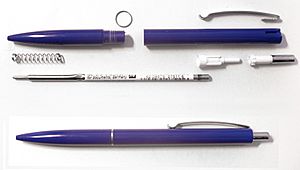 A ballpoint pen (also called a biro - pronounced "BY-roe" - in British English after its inventor László Bíró), is a modern kind of pen for writing. The ink is inside a long, thin unit inside the pen. When a person writes with it, the ink comes onto the small, ball-shaped tip of the unit. The ink dries almost as soon as it is on the paper.

Before the ballpoint pen was invented people usually wrote with pens which were dipped into ink, or fountain pens which were filled with ink whenever the ink was all used up. When the ballpoint pen was invented, many people thought they were bad things to use because people's handwriting was not so good. Children in schools had to continue to use ordinary ink pens. However, ballpoint pens were improved, and they are much easier to use than pens that need to be dipped in ink, so almost everybody writes with them now.

Galileo Galilei were working on a draft for an invention similar to the ballpoint pen in the early 1600s.

The inventor László Bíró registered his invention of the ballpoint pen in 1938.

There are two kinds of ballpoint pens:

The Bic Cristal is a popular disposable type of ballpoint pen whose design is recognised by its place in the permanent collection of the Museum of Modern Art, New York.

Tip of a ballpoint pen magnified

The concept of using a ball point within a writing instrument as a method of applying ink to paper has existed since the late 19th century. In these inventions, the ink was placed in a thin tube whose end was blocked by a tiny ball, held so that it could not slip into the tube or fall out of the pen.

The first patent for a ballpoint pen was issued on 30 October 1888, to John J. Loud, who was attempting to make a writing instrument that would be able to write "on rough surfaces-such as wood, coarse wrapping-paper, and other articles" which then-common fountain pens could not. Loud's pen had a small rotating steel ball, held in place by a socket. Although it could be used to mark rough surfaces such as leather, as Loud intended, it proved to be too coarse for letter-writing.

László Bíró, a Hungarian newspaper editor frustrated by the amount of time that he wasted filling up fountain pens and cleaning up smudged pages, noticed that inks used in newspaper printing dried quickly, leaving the paper dry and smudge free. He decided to create a pen using the same type of ink. Bíró enlisted the help of his brother György, a chemist, to develop viscous ink formulae for new ballpoint designs.

In 1941, the Bíró brothers and a friend, Juan Jorge Meyne, fled Germany and moved to Argentina, where they formed Bíró Pens of Argentina and filed a new patent in 1943.

Following World War II, many companies vied to commercially produce their own ballpoint pen design. In post-war Argentina, success of the Birome ballpoint was limited, but in mid-1945, the Eversharp Co., a maker of mechanical pencils, teamed up with Eberhard Faber Co. to license the rights from Birome for sales in the United States.

Paper Mate pens, among the emerging ballpoint brands of the 1950s, bought the rights to distribute their own ballpoint pens in Canada. Facing concerns about ink-reliability, Paper Mate pioneered new ink formulas and advertised them as "banker-approved". In 1954, Parker Pens released The Jotter—the company's first ballpoint—boasting additional features and technological advances which also included the use of tungsten-carbide textured ball-bearings in their pens. In less than a year, Parker sold several million pens at prices between three and nine dollars. In the 1960s, the failing Eversharp Co. sold its pen division to Parker and ultimately folded.

Marcel Bich also introduced a ballpoint pen to the American marketplace in the 1950s, licensed from Bíró and based on the Argentine designs. Bich shortened his name to Bic in 1953, becoming the ballpoint brand now recognised globally. Bic pens struggled until the company launched its "Writes The First Time, Every Time!" advertising campaign in the 1960s. Competition during this era forced unit prices to drop considerably. 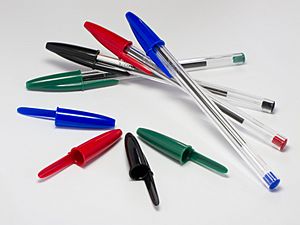 Ballpoint pens are produced in both disposable and refillable models. Refills allow for the entire internal ink reservoir, including a ballpoint and socket, to be replaced. Such characteristics are usually associated with designer-type pens or those constructed of finer materials. The simplest types of ballpoint pens are disposable and have a cap to cover the tip when the pen is not in use, or a mechanism for retracting the tip, which varies between manufacturers but is usually a spring- or screw-mechanism.

Rollerball pens employ the same ballpoint mechanics, but with the use of water-based inks instead of oil-based inks.

Because of a ballpoint pen's reliance on gravity to coat the ball with ink, most cannot be used to write upside-down. However, technology developed by Fisher pens in the United States resulted in the production of what came to be known as the "Fisher Space Pen". Space Pens combine a more viscous ink with a pressurised ink reservoir that forces the ink toward the point. Unlike standard ballpoints, the rear end of a Space Pen's pressurized reservoir is sealed, eliminating evaporation and leakage, thus allowing the pen to write upside-down, in zero-gravity environments, and reportedly underwater. Astronauts have made use of these pens in outer space.

Ballpoint pens with "erasable ink" were pioneered by the Paper Mate pen company.

The inexpensive, disposable Bic Cristal (also simply Bic pen or Biro) is reportedly the most widely sold pen in the world.

Ballpoint pens are sometimes provided free by businesses, such as hotels, as a form of advertising—printed with a company's name; a ballpoint pen is a relatively low cost advertisement that is highly effective (customers will use, and therefore see, a pen daily). 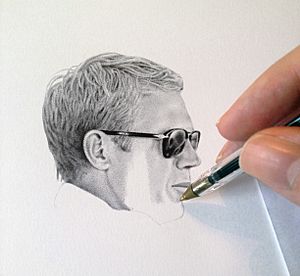 Ballpoint pens have proven to be a versatile art medium for professional artists as well as amateur doodlers. Low cost, availability, and portability are cited by practitioners as qualities which make this common writing tool a convenient, alternative art supply. Some artists use them within mixed-media works, while others use them solely as their medium-of-choice.

Effects not generally associated with ballpoint pens can be achieved. Traditional pen-and-ink techniques such as stippling and cross-hatching can be used to create half-tones or the illusion of form and volume. For artists whose interests necessitate precision line-work, ballpoints are an obvious attraction; ballpoint pens allow for sharp lines not as effectively executed using a brush. Finely applied, the resulting imagery has been mistaken for airbrushed artwork and photography, causing reactions of disbelief which ballpoint artist Lennie Mace refers to as the Wow Factor.

Famous 20th-century artists such as Andy Warhol, among others, have utilised ballpoint pens to some extent during their careers. Ballpoint pen artwork continues to attract interest in the 21st century, with contemporary artists gaining recognition for their specific use of ballpoint pens; for their technical proficiency, imagination, and innovation. Korean-American artist Il Lee has been creating large-scale, ballpoint-only abstract artwork since the late 1970s. Since the 1980s, Lennie Mace creates imaginative, ballpoint-only artwork of varying content and complexity, applied to unconventional surfaces including wood and denim. 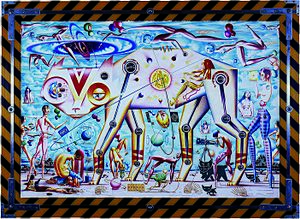 The ink holder of a disposable ballpoint pen.

Although designs and construction vary between brands, basic components of all ballpoint pens are universal. Standard components include the freely rotating ball point itself (distributing the ink), a socket holding the ball in place, and a self-contained ink reservoir supplying ink to the ball. In modern disposable pens, narrow plastic tubes contain the ink, which is compelled downward to the ball by gravity. Brass, steel, or tungsten carbide are used to manufacture the ball bearing-like points, then housed in a brass socket.

The function of these components can be compared with the ball-applicator of roll-on antiperspirant; the same technology at a larger scale. The ball point delivers the ink to the writing surface while acting as a buffer between the ink in the reservoir and the air outside, preventing the quick-drying ink from drying inside the reservoir. Modern ballpoints are said to have a two-year shelf life, on average.

The common ballpoint pen is a product of mass production, with components produced separately on assembly lines.

All content from Kiddle encyclopedia articles (including the article images and facts) can be freely used under Attribution-ShareAlike license, unless stated otherwise. Cite this article:
Ballpoint pen Facts for Kids. Kiddle Encyclopedia.