Joseph is an important figure in the Bible's Book of Genesis. Sold into slavery by his jealous brothers, he rose to become vizier, the second most powerful man in Egypt next to Pharaoh, where his presence and office caused Israel to leave Canaan and settle in Egypt. The composition of the story can be dated to the period between the 7th century BCE and the third quarter of the 5th century BCE, which is roughly the period to which scholars date the Book of Genesis.

In Rabbinic tradition, Joseph is considered the ancestor of another Messiah called, "Mashiach ben Yosef", according to which he will wage war against the evil forces alongside Mashiach ben David and die in combat with the enemies of God and Israel.

Joseph, son of Jacob and Rachel, lived in the land of Canaan with ten half-brothers, one full brother, and at least one half-sister. He was Rachel's firstborn and Jacob's eleventh son. Of all the sons, Joseph was preferred by his father, and this is represented by a "long coat of many colors". When Joseph was seventeen years old he had two dreams that made his brothers plot his demise. These dreams, implying his supremacy, angered his brothers. 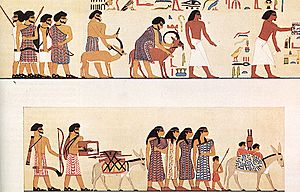 A group of Asiatic peoples depicted entering Egypt c.1900 BC

Joseph's half-brothers were jealous of him, most of them plotted to kill him, with the exception of Reuben, who suggested to have Joseph thrown into an empty cistern, intending to rescue Joseph himself. Unaware of this secondary intention, the others obeyed his first. Upon imprisoning Joseph, the brothers saw a camel caravan carrying spices and perfumes to Egypt, and sold Joseph to these merchants.

Joseph lived to the age of 110, living to see his great-grandchildren. Before he died, he made the children of Israel swear that when they left the land of Egypt they would take his bones with them, and on his death his body was embalmed and placed in a coffin in Egypt.

The children of Israel remembered their oath, and when they left Egypt during the Exodus, Moses took Joseph's bones with him. The bones were buried at Shechem, in the parcel of ground which Jacob bought from the sons of Hamor, which has traditionally been identified with site of Joseph's Tomb, before Jacob and all his family moved to Egypt.

All content from Kiddle encyclopedia articles (including the article images and facts) can be freely used under Attribution-ShareAlike license, unless stated otherwise. Cite this article:
Joseph (Hebrew Bible) Facts for Kids. Kiddle Encyclopedia.