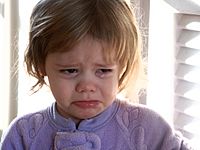 Various forms of crying are known as weeping, wailing, whimpering, bawling, and blubbering. Tears produced during emotional crying have a chemical composition which differs from other types of tears.

It can be very difficult to observe biological effects of crying, especially considering many psychologists believe the environment in which a person cries can alter the experience of the crier. However, crying studies in laboratories have shown several physical effects of crying, such as increased heart rate, sweating, and slowed breathing. Other common side effects of crying are quivering lips, a runny nose, and an unsteady, cracking voice.

Although it appears that the type of effects an individual experiences depends largely on the individual, for many it seems that the calming effects of crying, such as slowed breathing, outlast the negative effects, which could explain why people remember crying as being helpful and beneficial.

Men tend to cry for between two and four minutes, and women cry for about six minutes. Crying turns into sobbing for women in 65% of cases, compared to just 6% for men. Until adolescence, however, no difference between the sexes was found.

All content from Kiddle encyclopedia articles (including the article images and facts) can be freely used under Attribution-ShareAlike license, unless stated otherwise. Cite this article:
Crying Facts for Kids. Kiddle Encyclopedia.