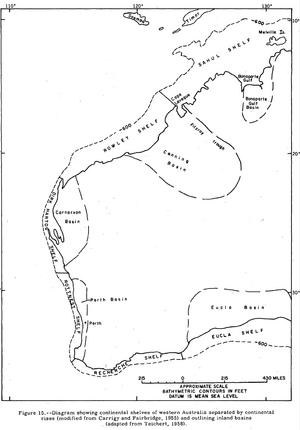 Geologically, the Sahul Shelf is part of the continental shelf of the Australian continent, lying off the northwest coast of mainland Australia.

The name "Sahull" or "Sahoel" appeared on 17th century Dutch maps applied to a submerged sandbank between Australia and Timor. On his 1803 map, Matthew Flinders noted the "Great Sahul Shoal" where Malays came from Makassar to fish for trepang (sea cucumber). The name Sahul Shelf (Dutch: Sahoel-plat) was coined in 1919 by G.A.F. Molengraaff, an authority on the geology of the then Dutch East Indies.

The existence of an extensive Sahul Shelf was suggested in 1845 by George Windsor Earl who called it the "Great Australian Bank" and noted that macropods (kangaroos) were found on Australia, New Guinea, and the Aru Islands. Earl also suggested the existence of the Sunda Shelf (which he called the "Great Asiatic Bank") covering the eastern Malay archipelago and Malay peninsula. In the 1970s, biogeographers coined "Sundaland" and "Sahul" as contrastive names for the continental regions extending from the adjacent shelves.

When sea levels fell during the Pleistocene ice age, including the last glacial maximum about 18,000 years ago, the Sahul Shelf was exposed as dry land. Evidence of the shoreline of this time has been identified in locations which now lie 100 to 140 metres below sea level. A Flash-based interactive timeline of sea level changes was developed by Monash University in the 2000s. The Arafura Shelf formed a land bridge between Australia, New Guinea, and the Aru Islands, and these lands share many Marsupial mammals, land birds, and freshwater fish as a result. Lydekker's Line, a biogeographical line, runs along the edge of Sahul Shelf where it drops off into the deep waters of the Wallacea biogeographical area. Wallacea sits in a gap between the Sahul Shelf and the Sunda Shelf, part of the continental shelf of Southeast Asia.

All content from Kiddle encyclopedia articles (including the article images and facts) can be freely used under Attribution-ShareAlike license, unless stated otherwise. Cite this article:
Sahul Shelf Facts for Kids. Kiddle Encyclopedia.