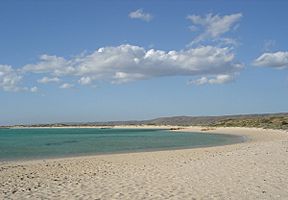 North West Cape is a large piece of land on the north west coast of Western Australia. There are mountains called the Cape Range through the middle of the peninsula and Ningaloo Reef is on the western edge. The town of Exmouth is also on the North West Cape.

All content from Kiddle encyclopedia articles (including the article images and facts) can be freely used under Attribution-ShareAlike license, unless stated otherwise. Cite this article:
North West Cape Facts for Kids. Kiddle Encyclopedia.