Kids Encyclopedia Facts
This page is about the race. For the ethnic group, see Malays. For other uses, see Malay (disambiguation). 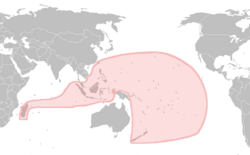 Map of the area historically regarded as being inhabited by the Austronesian peoples.

The Malay race is a race that was first proposed by the German scientist Johann Friedrich Blumenbach (1752–1840). Blumenbach described five races, and classified them by the colour of people's skin. The Malay race was classified as the brown race. Since Blumenbach, many anthropologists have rejected his theory of five races. Most agree that classifying races is more complicated than Blumenbach allowed for. The Malay race are considered the aborigines of the Malay Archipelago, determined by their archeological foundings dated as far as 1 AD within the Malay Archipelago.

The term Malay race was often used in the late 19th century and early 20th century to describe the Austronesian peoples.

All content from Kiddle encyclopedia articles (including the article images and facts) can be freely used under Attribution-ShareAlike license, unless stated otherwise. Cite this article:
Malay race Facts for Kids. Kiddle Encyclopedia.