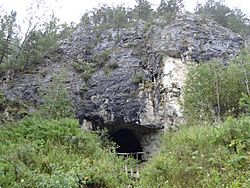 The Denisova Cave, where the "X woman" was found

The Denisovans or Denisova hominins are archaic humans in the genus Homo. They may be an extinct species or subspecies.

They were first discovered in March 2010 in the Denisova Cave in the Altai Mountains in Siberia. This cave that has also been inhabited by Neanderthals and modern humans.

A finger bone fragment of a juvenile female was discovered. She lived about 41,000 years ago, with about 3% to 5% of the DNA of Melanesians and Aboriginal Australians and around 6% in Papuans deriving from Denisovans.

The mitochondrial DNA (mtDNA) of the finger bone showed it was genetically distinct from Neanderthals and modern humans. The nuclear genome from this specimen suggested that Denisovans shared a common origin with Neanderthals.

DNA analysis has indicated that modern humans, Neanderthals, and the Denisova hominin last shared a common ancestor around 1 million years ago.

The mtDNA analysis also suggested that this species was the result of a migration out of Africa that came between a migration by Homo erectus individuals and later ones by some ancestors of most modern humans.

So far, only a finger bone, a toe bone and two teeth are the only body parts that have been found.  The finger bone is from a woman.  It is broader than a human finger.  This fact suggests that Denisovans were more robust than any modern humans.

All content from Kiddle encyclopedia articles (including the article images and facts) can be freely used under Attribution-ShareAlike license, unless stated otherwise. Cite this article:
Denisovan Facts for Kids. Kiddle Encyclopedia.