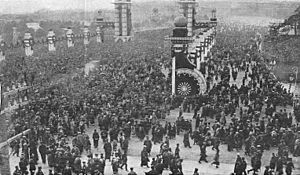 Throngs before the Imperial Palace in Japan awaiting the appearance of the Crown Prince Hirohito for the recent proclamation of his official recognition as the heir apparent to the Japanese Imperial Throne – New York Times, 1916.

An heir (female: heiress) is a person who has inherited something after the original owner's death. Most often a child after his or her parent's death.

Heir apparent and heir presumptive usually refer to someone who will inherit a royal or noble title:

An heir apparent is someone who will inherit at the death of the present title holder.

A Crown Prince is an heir apparent to the throne in a monarchy.

An heir presumptive is someone who may inherit, unless someone with a better claim under the rules of succession is found.

Monarchies that have used the title

All content from Kiddle encyclopedia articles (including the article images and facts) can be freely used under Attribution-ShareAlike license, unless stated otherwise. Cite this article:
Heir apparent Facts for Kids. Kiddle Encyclopedia.