Kids Encyclopedia Facts
In this Japanese name, the family name is Ōyama.

Prince Ōyama Iwao, OM, GCCT (大山 巌code: ja is deprecated , 12 November 1842 – 10 December 1916) was a Japanese field marshal, and one of the founders of the Imperial Japanese Army.

Ōyama was born in Kagoshima to a samurai family of the Satsuma Domain. as a younger paternal cousin to Saigo Takamori. A protégé of Ōkubo Toshimichi, he worked to overthrow the Tokugawa Shogunate and thus played a major role in the Meiji Restoration. He served as the commander of the Detached First Brigade during the Boshin War. At the Battle of Aizu, Ōyama was the commander of the Satchōdo's field artillery positions on Mount Oda. During the course of the siege, he was wounded by an Aizu guerilla force under Sagawa Kanbei. 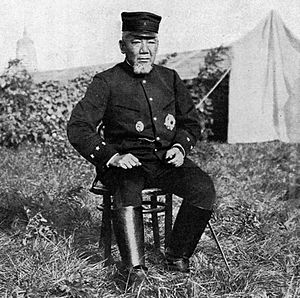 In 1870, Ōyama was sent overseas to the École spéciale militaire de Saint-Cyr in France (August 1870 – March 1871) to study and was appointed the official Japanese military observer to the Franco-Prussian War. He also spent three years (July 1871 – October 1874) in Geneva studying foreign languages, and became fluent in Russian. In 1872, he was sent by the Japanese government to the United States to study at Temple Hill Academy in Geneseo, New York. Ōyama Iwao is the first recorded Japanese customer for Louis Vuitton, having purchased some luggage during his stay in France. After promotion to major general, he went to France again for further study, together with Kawakami Sōroku. On his return home, he helped establish the fledgling Imperial Japanese Army, which was soon employed in suppressing the Satsuma Rebellion, although Ōyama and his elder brother were cousins of Saigō Takamori.

In the First Sino-Japanese War, Ōyama was appointed the commander-in-chief of the Japanese Second Army, which after landing on Liaotung Peninsula, carried Port Arthur by storm, and subsequently crossed to Shantung, where it captured the fortress of Weihaiwei. After the war, Ōyama was disparaged by American reporter Trumbull White for failing to restrain his troops during the Port Arthur Massacre.

For his services Ōyama received the title of marquis under the kazoku peerage system, and, three years later in January 1898, he became a field-marshal. In the Russo-Japanese War of 1904–1905 he was appointed the Commander-in-Chief of the Japanese armies in Manchuria. As Supreme Commander of the Japanese Manchurian Army, Ōyama had complete authority over all Japanese land operations during the war, and personally directed the tactics of Japanese forces in all major battles, winning the Battle of Liaoyang and repulsing Russian counter-attacks at the Battle of Shaho and the Battle of Sandepu. He was replaced by General Kodama Gentarō briefly during early 1905 due to illness, but recovered to direct Japanese forces in the final Battle of Mukden.

After Japan's victory, Emperor Meiji elevated him in September 1907 to the rank of prince (公爵code: ja is deprecated , kōshaku), the highest rank of the Empire of Japan.

As the War Minister in several cabinets and as the Chief of the Army General Staff, Ōyama upheld the autocratic power of the oligarchs (genrō) against democratic encroachments. However, unlike Yamagata Aritomo, Ōyama was reserved and tended to shun politics. From 1914 to his death he served as the Lord Keeper of the Privy Seal (内大臣code: ja is deprecated , naidaijin).

In 1906, Ōyama was awarded the Order of Merit by King Edward VII. His Japanese decorations included Order of the Golden Kite (1st class) and Order of the Chrysanthemum.

Ōyama died at the age of seventy five in 1916. Ōyama was a large man, and enjoyed large meals. His weight exceeded 210 pounds (95 kg), and may have contributed to his death, possibly arising from diabetes.

Ōyama's first wife Sawa died of puerperal disorder. Second wife Sutematsu (a survivor of the Battle of Aizu, a sister of former Aizu retainers Yamakawa Hiroshi and Yamakawa Kenjirō) was one of the first female students sent to the United States as part of the Iwakura Mission in the early 1870s. She spent eleven years there, graduating from Vassar College in 1882. In the next year she accepted her former enemy's proposal.

Ōyama was Emperor Meiji's first candidate for rearing future emperor Hirohito as a sort of surrogate father in 1901, in accordance with royal customs, but Ōyama declined and the role instead went to Count Kawamura Sumiyoshi.

Ōyama's first son Takashi, a navy cadet, died in the accidental explosion and sinking of the cruiser Matsushima in 1908. Second son Kashiwa (ja) became an archaeologist after he retired from army.

Ōyama, who spoke and wrote several European languages fluently, also liked European-style architecture. During his tenure as the War Minister, he built a large house in Tokyo modelled after a German castle.

Although he was very pleased with the design, his wife Sutematsu did not like it at all, and insisted that the children's room be remodelled in Japanese style, so that they would not forget their Japanese heritage. The house was destroyed by the Great Kantō earthquake in 1923. (or by American air raids) need confirmation

In 1869, the British military band instructor John William Fenton, who was then working in Yokohama as an o-yatoi gaikokujin, told the members of Japan's military band about the British national anthem "God Save the King" and emphasised the necessity of a similar national anthem for Japan. The band members requested artillery Captain Ōyama Iwao, who was well versed in Japanese and Chinese literature, to select appropriate words and Ōyama selected the poem which came to be used in Japan's national anthem kimigayo. 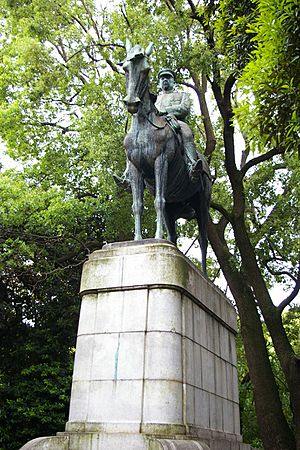 From the Japanese Wikipedia

All content from Kiddle encyclopedia articles (including the article images and facts) can be freely used under Attribution-ShareAlike license, unless stated otherwise. Cite this article:
Ōyama Iwao Facts for Kids. Kiddle Encyclopedia.