Order of succession facts for kids

The order of succession is a sequence of people and events in a specific order. It may mean the passing of royal or other powers, for example in a dynasty.

The "order of succession" may be used in a historical way, such as a list of former leaders. Also, the phrase may mean the pre-planned process through which a leader takes over from another because of death, resignation, or removal

Succession becomes a chronology which has developed during time which has passed—like a list of popes or list of Emperors of Japan.

Succession histories are unique, but not always obvious. For example, Charles IX of Sweden (1604–1611) was only the third Swedish king named Charles.

Pope Francis is the 266th Pope of the Roman Catholic Church. Saint Peter is listed as the first of 266 popes.

Across the span of centuries, there have been problems with the list and order of succession after St. Peter. For example: During the Western schism in the 14th century, there was more than one pope at the same time. Each had notable international support. Only some are included on the chronology of today's list.

At that time, European leaders had to choose to support one pope or the other.

Akihito is the 125th Emperor of Japan. Emperor Jimmu is listed as the first of 125 emperors.

Across time, there have been difficulties with the list and order of succession after Jimmu. For example: During the Nanboku-chō period in the 14th century, there was more than one emperor at the same time. Each had notable support. Only some are included in today's list

The "order of succession" or "line of succession" is a formal plan which determines who inherits a future role or a position in a hierarchy after death or other cause creates a vacancy or an opportunity for succession.

Many countries have developed formal succession planning. In contrast, Kim Jong-il of the Democratic People's Republic of Korea selected his youngest son as the "Dear Successor" or "Great Successor". The process which led to this choice is not known.

In some countries including Sweden since 1980, the Netherlands since 1983, Norway since 1990, Belgium since 1991, Denmark since 2009, and the United Kingdom since 2015, the eldest child of a monarch is expected to become the next monarch. This is known as "full" or "equal" as primogeniture.

In many countries including Spain and Japan, special preference is given to male children. This is known as "male primogeniture." 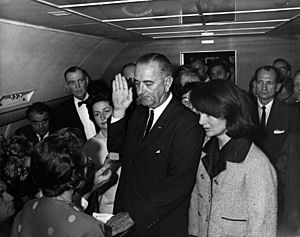 In the United States, the line of succession is explained in the "Presidential Succession Act of 1947". If the president cannot fullfil his duties, the Vice President is expected to take his place; and then the Speaker of the United States House of Representatives is next.

All content from Kiddle encyclopedia articles (including the article images and facts) can be freely used under Attribution-ShareAlike license, unless stated otherwise. Cite this article:
Order of succession Facts for Kids. Kiddle Encyclopedia.