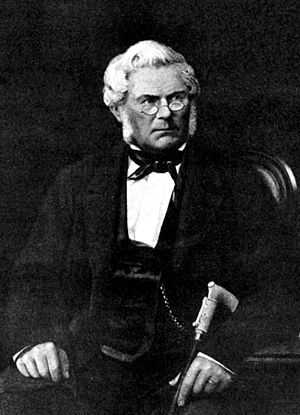 Immanuel Nobel (24 March 1801 – 3 September 1872), the younger, was a Swedish engineer and inventor. He was the inventor of the rotary lathe used in plywood manufacturing. He was the father of Robert Nobel, Ludvig Nobel and Alfred Nobel. He also often experimented with nitroglycerin with his sons.

Nobel moved to Russia from Sweden in 1838. This was to sell his inventions in St. Petersburg. He lived there for two decades with his family. Immanuel founded a successful war supplies factory. The end of the Crimean War in 1856 brought about a shift in Russian policies. Tsar Alexander II ordered a severe cut in the military budget. Immanuel's company lost money. In 1859, Immanuel returned to Sweden. He left his factory to his son Ludvig. In 1862 Immanuel's firm was finally sold by his creditors.

All content from Kiddle encyclopedia articles (including the article images and facts) can be freely used under Attribution-ShareAlike license, unless stated otherwise. Cite this article:
Immanuel Nobel Facts for Kids. Kiddle Encyclopedia.