Tuition fees in the United Kingdom facts for kids

Tuition fees were first introduced across the entire United Kingdom in September 1998 under the Labour government of Tony Blair to fund tuition for undergraduate and postgraduate certificate students at universities; students were required to pay up to £1,000 a year for tuition. However, as a result of the new devolved national administrations for Scotland, Wales and Northern Ireland, there are now different arrangements for tuition fees in each of the nations.

Main page: Timeline of Tuition Fees in the United Kingdom

In May 1996, Conservative Prime Minister John Major commissioned an inquiry, led by Sir Ron Dearing, into the funding of British higher education over the next 20 years. It estimated additional funding of almost £2 billion would be needed for the period, including £350 million in 1998-9 and £565 million in 1999-2000, in order to expand student enrolment, provide more support for part-time students and ensure an adequate infrastructure. 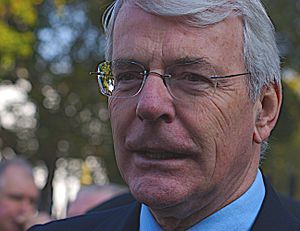 In response, the Teaching and Higher Education Act 1998 was enacted on 16 July 1998, part of which introduced tuition fees in all the countries of the United Kingdom. The act introduced a means-tested method of payment for students based on the amount of money their families earned. Starting with 1999-2000, maintenance grants for living expenses would also be replaced with loans and paid back at a rate of 9 percent of a graduate's income above £10,000.

Following devolution in 1999, the newly devolved governments in Scotland and Wales brought in their own acts on tuition fees. The Scottish Parliament established, and later abolished a graduate endowment to replace the fees. Wales introduced maintenance grants of up to £1,500 in 2002, a value which has since risen to over £5000.

In England, tuition fee caps rose with the Higher Education Act 2004. Under the Act, universities in England could begin to charge variable fees of up to £3000 a year for students enrolling on courses as from the academic year of 2006-07 or later. This was also introduced in Northern Ireland in 2006-07 and introduced in Wales in 2007-08. In 2009-10 the cap rose to £3225 a year to take account of inflation. Following the Browne Review in 2010, the cap was controversially raised to £9,000 a year, sparking large student protests in London. A judicidal review against the raised fees failed in 2012, and so the new fee system came into use that September.

Further adjustments were put forth in the 2015 budget, with a proposed fee increase in line with inflation from the 2017-18 academic year onwards, and the planned scrapping of maintenance grants from September 2016. The changes were debated by the Third Delegated Legislation Committee in January 2016, rather than in the Commons. The lack of a vote on the matter has drawn criticism, as by circumventing the Commons the measures "automatically become law".

In England, tuition fees are capped at £9,000 a year for UK and EU students, with around 76% of all institutions charging the full amount in 2015-16. The average fee for a three-year course is currently £26,000 in total. A loan of the same size is available for most universities, although students of private institutions are only eligible for £6,000 a year loans.

From 2017-18 onwards, the £9,000 fee cap will rise with inflation. Maintenance grants are also available to current students in England, although these are scheduled to cease with the 2016-17 academic year. Maintenance loans are available for living costs, and these are means tested. These loans are scheduled to increase in size for 2016-17, when the maintenance grant system is phased out. There will be a vote in the autumn to consider a further increase effective with the 2017-18 year. Several universities have already advertised fees of £9,250 for the year in anticipation of such a vote passing.

In the 2015 spending review, the government also proposed a freeze in the repayment threshold for tuition fee loans at £21,000; a figure which was previously set to rise with average earnings. The changes, if passed, will affect all Plan 2 tuition fee loans, backdated to cover loans taken out from 2012.

Many commentators suggested that the 2012 rise in tuition fees in England would put poorer students off applying to university. However, the gap between rich and poor students has slightly narrowed (from 30.5% in 2010 to 29.8% in 2013) since the introduction of the higher fees. This may be because universities have used tuition fees to invest in bursaries and outreach schemes. In 2016, The Guardian noted that the number of disadvantaged students applying to university had increased by 72% from 2006 to 2015, a bigger rise than in Scotland, Wales or Northern Ireland. It wrote that most of the gap between richer and poorer students tends to open up between Key Stage 1 and Key Stage 4 (i.e. at secondary school), rather than when applying for university, and so the money raised from tuition fees should be spent there instead.

Tuition fees are currently capped at £3,805 in Northern Ireland, with loans of the same size available from Student Finance NI. Loan repayments are made when income rises above £17,335 a year, with graduates paying back a percentage of their earnings above this threshold.

Tuition is handled by the Student Awards Agency Scotland (SAAS), which does not charge fees to what it defines as "Young Students". Young Students are defined as those under 25, without children, marriage, civil partnership or cohabiting partner, who have not been outside of full-time education for more than three years. Fees exist for those outside the young student definition, typically from £1,200 to £1,800 for undergraduate courses, dependent on year of application and type of qualification. Postgraduate fees can be up to £3,400.

The system has been in place since 2007 when graduate endowments were abolished. Labour's education spokesperson Rhona Brankin criticised the Scottish system for failing to address student poverty. Scotland has fewer disadvantaged students than England, Wales or Northern Ireland and disadvantaged students receive around £560 a year less in financial support than their counterparts in England do.

Like their English counterparts, Welsh universities are able to charge up to £9,000 a year in tuition fees. However, Welsh students can apply for fee grants of up to £5,190, in addition to a £3,810 loan to cover these costs. This system also applies to Welsh students who study elsewhere in the United Kingdom.

There have been two main proposed alternative ways of funding university studies: from general taxation or by a graduate tax.

Tuition is paid for by general taxation in Germany, although only 27% of young people gain higher education qualification there, whereas in the UK the comparable figure is 48%. Fully or partly funding universities from general taxation has been criticised as a 'tax cut for the rich and a tax rise for the poor' because people would be taxed to pay for something that many would not derive a benefit from, while graduates generally earn more due to their qualifications and only have to pay them back.

Jeremy Corbyn, current Labour leader, has stated that he would remove tuition fees and instead fund higher education by increasing National Insurance and Corporation Tax.

During the 2015 Labour leadership election, Andy Burnham said that he would introduce a graduate tax to replace fees. He was ultimately unsuccessful in his bid for leadership. A graduate tax has been criticised because there would be no way to recover the money from students who move to a different country, or foreign students who return home.

All content from Kiddle encyclopedia articles (including the article images and facts) can be freely used under Attribution-ShareAlike license, unless stated otherwise. Cite this article:
Tuition fees in the United Kingdom Facts for Kids. Kiddle Encyclopedia.