The Greenwich Foot Tunnel crosses beneath the River Thames in East London, linking Greenwich (Royal Borough of Greenwich) on the south bank with Millwall (London Borough of Tower Hamlets) on the north. 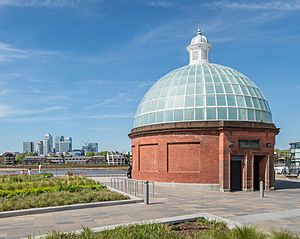 Entrance to the Greenwich foot tunnel, southern side, with a view of Canary Wharf

The tunnel was designed by civil engineer Sir Alexander Binnie for London County Council and constructed by contractor John Cochrane & Co. The project started in June 1899 and the tunnel opened on 4 August 1902. The tunnel replaced an expensive and sometimes unreliable ferry service allowing workers living south of the Thames to reach their workplaces in the London docks and shipyards in or near the Isle of Dogs. Its creation owed much to the efforts of working-class politician Will Crooks, who had worked in the docks and, after chairing the LCC's Bridges Committee responsible for the tunnel, later served as Labour MP for Woolwich. 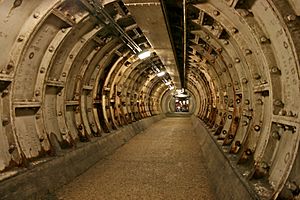 The entrance shafts at both ends are beneath glazed domes. Lifts, installed in 1904, were upgraded in 1992 and again in 2012, and helical staircases allow pedestrians to access the sloping, tile-lined tunnel. The cast-iron tunnel is 1,215 feet (370.2 m) long, 50 feet (15.2 m) deep and has an internal diameter of about 9 feet (2.74 m). The cast-iron rings are coated with concrete and surfaced with some 200,000 white glazed tiles. The northern end was damaged by bombs during the Second World War and repairs included a thick steel and concrete inner lining that reduces the diameter substantially for a short distance. The North tower has 87 steps, and the South tower has 100.

Because of its depth and location, the tunnel remains cool even on hot days.

A notice at the tunnel entrance states that the tunnel is private property and not a public right of way. Ordnance Survey maps do not show a right of way on the route of the tunnel. The tunnel is accessible by spiral staircases and large lifts that were refurbished between 2010 and 2012. The tunnel is also part of the UK's National Cycle Route 1 linking Inverness and Dover. As of October 2017, cyclists are required to dismount and push their bikes through the tunnel although plans to remove this requirement have been considered. A National Trail, the Thames Path, uses the tunnel to rejoin the southbound part of the path.

Before recent renovations, the attendant-operated lift service was only open from 7 am to 7 pm on weekdays and Saturdays, and 10 am to 5.30 pm on Sundays, with no service on Christmas Day or Boxing Day. Staff shortages and other problems meant that even during these times the lifts were often unavailable. Since 1999, if the lift was not functioning, anyone unable to use the stairs could take the Docklands Light Railway between Island Gardens DLR station (close to the northern end of the tunnel) and Cutty Sark DLR station, close to the southern end. However, non-folding bicycles are not permitted on the Docklands Light Railway system at peak times. 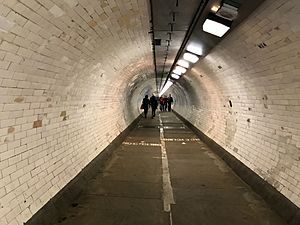 Greenwich Council started work to upgrade the tunnel on 19 April 2010, intending to reduce leakage, improve drainage and install new lifts, CCTV, communication facilities and signage. Completion was planned for March 2011 but this slipped to September 2011. The tunnel was supposed to be accessible throughout most of the renovations, but it closed completely in February 2011. Stair use was soon regained but lifts remained out of service until early 2012, and remained subject to occasional brief closures during 2012. In October 2012 Greenwich Council acknowledged that the upgrade work had not been completed on time and had run over budget. The work was finally completed and included new customer-operated lifts with surface level availability signs, CCTV coverage, upgraded lighting and renewal or replacement of vital structural components. 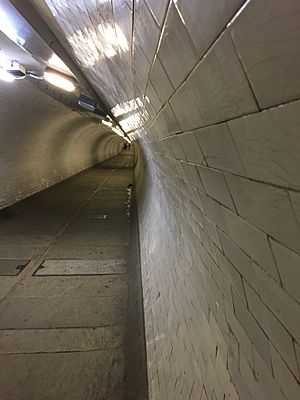 The 'Friends of Greenwich and Woolwich foot tunnels' (FOGWOFT) was established in September 2013. Following encouragement from FOGWOFT and information from the Institution of Civil Engineers, on 5 July 2016 an interpretative plaque was unveiled near the tunnel's Greenwich entrance by the deputy leader of Royal Borough of Greenwich council.

In 2016 the Ethos Active Mobility system was installed in the tunnel to monitor and actively manage tunnel usage. The system uses computer vision to count and measure the speed of bicycles and pedestrians, and displays messages on electronic signs to encourage considerate behaviour. The system has also been installed in the Woolwich foot tunnel and aims to make urban shared spaces safer and more pleasant to use for all. The system displays two messages: "No cycling allowed" (in red text) during busy periods, and "Please consider pedestrians" (in green text) during quiet periods. As of March 2017 this system is still in its trial phase, and cycling in the tunnel is still not permitted and will not be until the bylaws are changed. Despite this there are still many who cycle through the tunnel.

All content from Kiddle encyclopedia articles (including the article images and facts) can be freely used under Attribution-ShareAlike license, unless stated otherwise. Cite this article:
Greenwich foot tunnel Facts for Kids. Kiddle Encyclopedia.